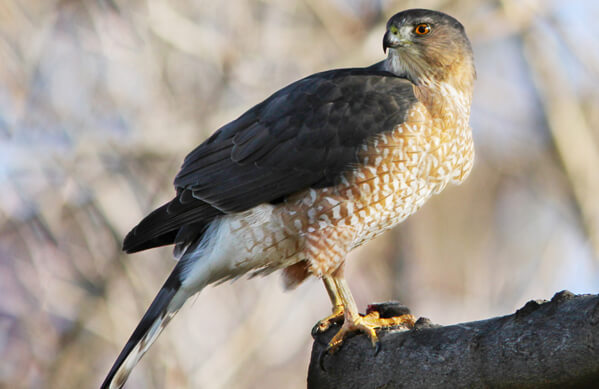 The crow-sized Cooper's Hawk is a raptor of the woodlands, with short, rounded wings and a long tail — excellent adaptations for pursuing smaller birds through thick understory. Folk names for this forest stalker include big blue darter, chicken hawk, striker, and swift hawk. It's named after the naturalist William Cooper, one of the founders of the New York Lyceum of Natural History (now the New York Academy of Sciences).

Like so many other species, Cooper's Hawks are harmed by habitat loss, which may limit suitable breeding habitat. Collisions with glass windows, turbines, and poorly lit communications towers also account for many deaths.

This wide-ranging raptor breeds throughout much of the United States, southern Canada, and northern Mexico. Birds from most of the Canadian and northern U.S. populations migrate south for the winter, with some ranging as far south as Panama.

Despite its broad distribution, this is a secretive species that is most noticeable during migration. The "Coop's" flight can be recognized by quick, consecutive wing beats followed by a short glide. They occasionally soar, with long tail and short wings giving them a distinctive flight profile that some compare to a "flying cross."

Cooper's Hawks capture prey using the element of surprise, perching quietly, then bursting from cover on foot or zipping through dense vegetation on the wing in pursuit. They prey almost exclusively on small to mid-sized birds, ranging from American Robins and Northern Flickers to Mourning Doves.

They also prey on smaller raptors, including American Kestrel and the closely related Sharp-shinned Hawk, as well as small mammals such as chipmunks, squirrels, mice, and bats.

Coops are well-known for hunting songbirds at backyard feeders, particularly during the winter months. Like other raptors, including Bald Eagle, female Cooper's Hawks are larger than males. The species' harsh-sounding "kek kek kek" calls, which sound somewhat like maniacal laughter, may be an essential element of its pair bond.

Cooper's Hawks can use a wide range of nesting habitats, including those in urban areas and tree plantations. In this species, the male does the nest-building, then leaves most of the incubation and chick care to the female.

Immature Cooper's Hawks look quite different from the blue-backed, red-eyed adults; they have yellow eyes and pale underparts with thin black streaks. Eye color in this species changes with age, from yellow in juveniles to orange in second-year birds, then to a vivid red in adults.

Although Cooper's Hawks declined in the mid-20th century because of human persecution and the use of DDT, the species has recovered remarkably well. Today, populations are thriving, owing to its ability to exploit human-altered landscapes.

Unfortunately, Cooper's Hawks are still a frequent victim of collisions. Cooper's Hawks and dozens of other bird species collide with glass, with up to one billion birds perishing each year in the United States alone. (See a 2014 study on birds and glass collisions.) Poorly sited wind turbines are another source of increasing bird mortality.

With support from the Leon Levy Foundation, American Bird Conservancy continues to provide training and tools to reduce glass collisions deaths at buildings, from stadiums to individual homes. The Foundation also supports our Bird-Smart Wind Energy Program, which — along with our partner Black Swamp Bird Observatory — recently won a victory to prevent bird-killing turbines from gaining a foothold on public lands in the Great Lakes. Close to the shores of Lake Erie, the Camp Perry facility would have been built in one of the country's most important areas for migratory birds.