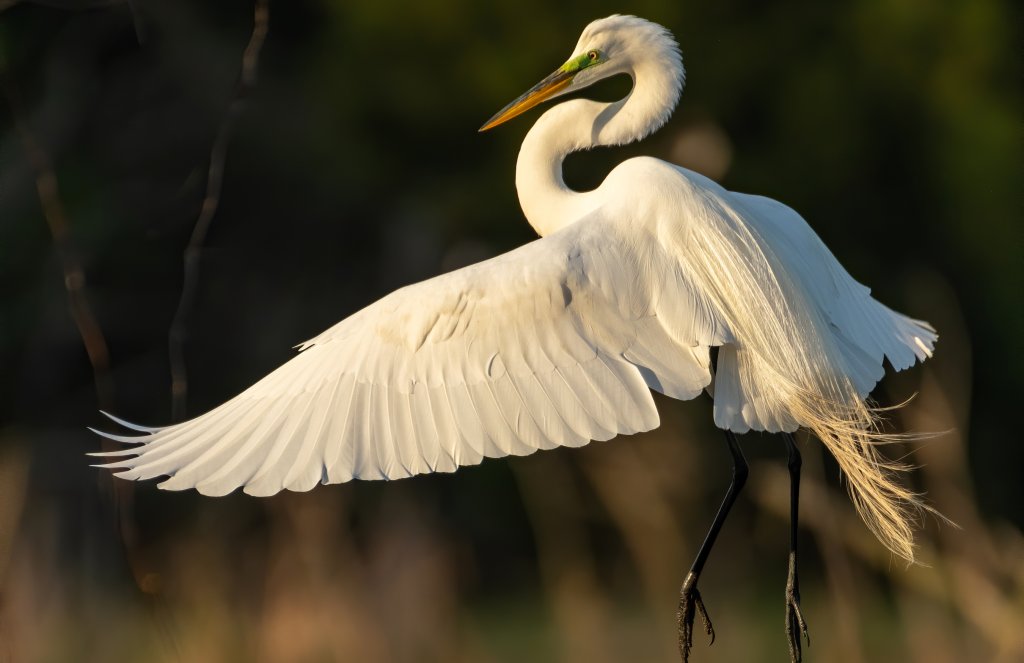 About the Great Egret

The graceful, all-white Great Egret stands over 3 feet tall, with a lissome, S-curved neck, dagger-like yellow bill, and long black legs. This cosmopolitan wading bird is a common sight in wetlands around the world, where it is also known as the Common, American, or Great White Egret, or White Heron.

When Fashion is Fatal

The Great Egret becomes even more beautiful in its breeding plumage, developing long, delicate plumes that the bird fans during displays. These lacy feathers are known as aigrettes, a French word that is the source of the Great Egret's English common name.

As concerned citizens and early conservationists began to publicize this slaughter, pressure mounted to stop commercial bird-hunting for the plume industry. By 1897, the newly formed Massachusetts Audubon Society helped convince the Massachusetts legislature to outlaw the wild bird feather trade. Soon, other Audubon societies formed around the United States, which led to the creation of the National Audubon Society, which has the Great Egret as its symbol.

Most of the Great Egret's harsh-sounding vocalizations are heard during its courtship displays and in the nesting colony. It also voices a harsh-sounding, low “corr” when disturbed.

Although Great Egrets are usually solitary birds, they congregate in colonies (also known as rookeries) during their breeding season, often alongside other wading birds such as Reddish Egrets and other herons or Wood Storks. These large, noisy colonies are usually located high in trees or shrubs over water, to discourage potential predators. Within the colony, Great Egrets are territorial and aggressive, defending their space with sharp bill jabs and harsh calls.

Early in the breeding season, adult Great Egrets grow long plumes, their aigrettes, which they brandish during courtship displays. Males perform most of these displays, preening the wings, ducking the head, holding and shaking twigs in the bill, and stretching the neck.  In addition to decorative courtship plumage, the Great Egret's lores (the bare skin between the eye and base of the bill) change color during courtship — from the regular dull yellow color to a vivid, eye-catching lime-green.

Great Egrets are seasonally monogamous, remaining with one mate per year. After pairing up, the male selects a territory, and the couple proceeds to build a flimsy-looking platform nest of stems, sticks, and twigs. The female lays 3-4 eggs, which both parents take turns brooding. The parents feed the downy white young by regurgitation while nestlings compete fiercely with each other; dominant chicks sometimes kill their younger, weaker siblings. This seemingly cruel behavior, known as siblicide, reflects the breeding conditions of a particular year – if there is enough food, more chicks survive. Siblicide is also seen in other birds such as Great Horned Owl, Red-tailed Hawk, and Brown Pelican.

The Great Egret, like so many of its kin, is an omnivore. It eats mainly small fish but also consumes amphibians, reptiles, birds, and small mammals, as well as invertebrates including crayfish, shrimp, dragonflies, and grasshoppers.

This bird's hunting strategy is as flexible as its diet. It can be seen foraging alone or in groups, wading through shallow water in search of food, or standing stock-still, waiting for unsuspecting prey to approach. Prey is secured with a quick jab of the egret's long neck and bill.

Although usually associated with water, Great Egrets occasionally hunt on land, in grassy areas or mown fields. In Florida, for example, they can be seen patrolling lizard-sheltering shrubs, shadowing people fishing, and even grubbing turkey leg scraps from amusement park patrons.

Four Great Egret subspecies are distributed across the Americas, southern Europe, Asia, Africa, Australasia, and Oceania. In the Americas, the Great Egret is a short-distance migrant, leaving northern breeding areas for warmer wintering spots free of ice. Like many other wading birds, this species migrates south during the day in small flocks.

The unrestrained slaughter caused by the plume trade and other market hunting led to the creation of new bird conservation laws, including the Migratory Bird Treaty Act (1918). Once protections were in place, Great Egret numbers began to rebound. Like the Wood Duck and Bald Eagle, this species' recovery is an inspiring conservation success story. While somewhat adaptable, the Great Egret remains tied to wetlands. Populations rebounded from the historic depredations of the plume trade, but numbers have recently declined again in some parts of the southern United States due to habitat loss caused by the filling and draining of wetlands for industrial, agricultural, and urban development. Another threat to this species and other water birds, such as the King Rail, comes from pesticides, which leach into the birds' habitats.

In the U.S., much of the Great Egret's remaining habitat falls within national wildlife refuges and other protected areas. Protection and restoration of these wetlands are critical for the long-term survival of this beautiful heron. 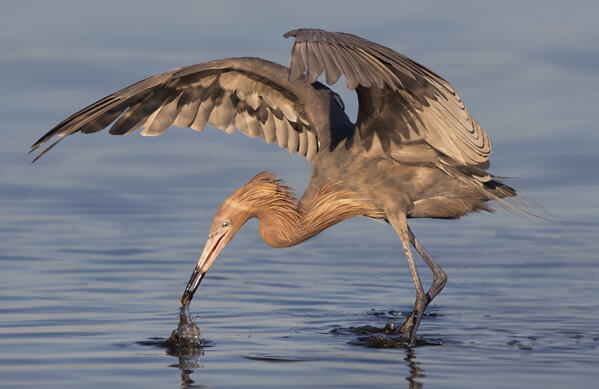