"Phantom of the North" 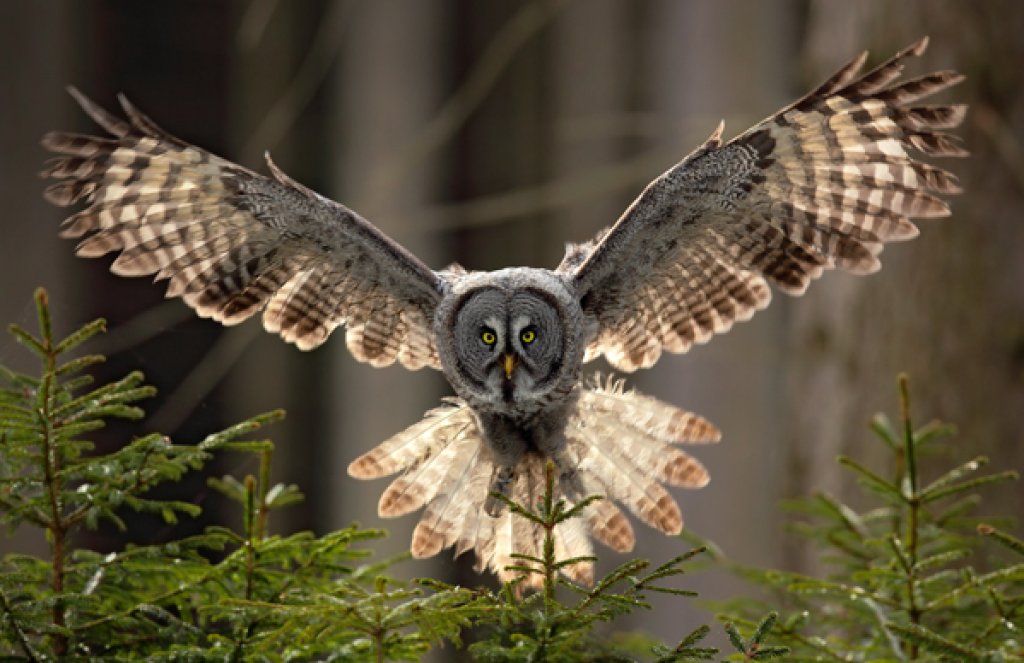 About the Great Gray Owl

Among the largest in its family, the Great Gray Owl holds the title as North America's longest owl species. This majestic bird's size, coloration, and range have inspired a host of nicknames, including Spectral Owl, Lapland Owl, Spruce Owl, and Sooty Owl.

The Great Gray's lightly mottled plumage, speckled with lighter gray, tan, and white, allows it to blend beautifully into the wooded environments it favors. Its large head lacks ear tufts, and it has an especially large facial disk and piercing yellow eyes.

Despite its size, the Great Gray Owl weighs only a few pounds — less than other large owls such as the Snowy and Great Horned.

For all their imposing appearance, Great Gray Owls have relatively small bodies, weighing only two to four pounds. Most of their apparent bulk actually consists of dense layers of feathers — a necessity in the frigid environments they inhabit. A large appearance can also fool potential predators, making them think twice before attacking.

Calls and bill-snapping among a family group:

Great Gray Owls begin to breed at two to three years of age. A pair forms a monogamous bond in late winter, cementing the relationship through mutual preening and courtship feeding. This owl does not build its own nest; rather, it may re-use a stick nest built by another large bird such as a Red-tailed Hawk or Common Raven, or seek a cavity in a broken-off snag, one to 50 feet above the ground. The female lays two to five eggs, which she incubates for about a month, while the male brings her food. Equipped with sharp talons, the female and male will aggressively defend their nest against other animals (including humans), chasing away intruders up to the size of bears.

After hatching, the owlets will remain in the nest for a month or so. They leave the nest before they can fly during what's known as a “branching” period. For a few weeks, the young "branchers" scramble up and down leaning trees and exercise their wings, until they can fly. Once the owlets fledge, the male begins to bring them food, relieving the female of that chore. After they reach independence, young Great Gray Owls disperse to their own hunting grounds, up to 20 miles away.

Much like another boreal predator, the Northern Hawk Owl, the Great Gray Owl practices a "sit and wait" hunting strategy, perching unobtrusively at the edge of a forest clearing until it detects prey. This is where its large facial disk comes in handy, collecting sound much as a satellite dish catches signals. Like the Barn Owl, the Great Gray has almost supernatural hearing: It can pinpoint prey from over 300 feet away, and beneath snow well over a foot deep. Once zeroed in, it swoops down, plunging into the snow to snatch a vole or other rodent. This raptor also hunts by gliding close to the ground, listening for activity beneath the snow.

Although the Great Gray Owl feeds almost exclusively on voles, shrews, and other small rodents, it sometimes hunts larger prey like Snowshoe Hares and, rarely, birds.

The Great Gray Owl is a truly boreal species, found across the Northern Hemisphere from Scandinavia to northern Asia to northern North America. It lives in coniferous forests from central Alaska across Canada, down the Northern Rockies, and into extreme northern Minnesota. Isolated populations occur in Oregon, California's Sierra Nevada mountains, and north-central Wyoming.

This owl is typically a permanent resident throughout its range, but a slump in prey populations — particularly in vole numbers — may cause these owls to move south in search of food. This phenomenon, known as an irruption, also occurs with other northern bird species such as the Snowy Owl, Evening Grosbeak, and Pine Siskin.

Although the Great Gray Owl population is believed to be stable, this species does face some challenges. Habitat loss due to forest clearing, particularly the removal of suitable snags for hunting and nesting, is the biggest threat to this owl. Climate change may soon drastically reduce its boreal range. In irruption years, these owls may be more vulnerable to fatal collisions with vehicles as they move south. Rodenticide use may decimate their prey base, increasing the risk of starvation.

Thoughtful, sustainable forestry can benefit the Great Gray Owl by providing more of the semi-open habitat it requires, as well as by retaining suitable snags for perches and nest sites.