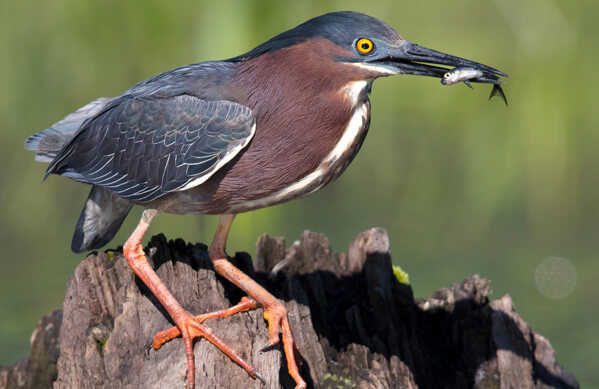 The Green Heron is the second smallest of the dozen heron species — including egrets and bitterns — nesting in the United States. (The Least Bittern is the smallest.) It is also one of the most widespread.

A sit-and-wait predator, the Green Heron usually crouches at a spot where small fish or frogs happen by, sitting still until it springs its head forward to grab prey with its dagger-like bill. Sometimes, the bird takes an extra step, picking up an aid with its bill — perhaps a twig, feather, leaf, or insect. The heron then drops this bait in the water, freezing and watching for any attracted fish that come to investigate.

This tool-wielding behavior puts the Green Heron in select company with a few other birds, including some crows; parrots; the Egyptian Vulture, which drops rocks to break open eggs; and the Woodpecker Finch of the Galápagos Islands, which spears grubs with a spine or twig.

Minnows, sunfish, and other small fish constitute much of the Green Heron's diet. However, wetland habitats offer many more menu options, including crayfish, tadpoles and frogs, small snakes, large insects, and sometimes earthworms, snails, and other small animals.

Hunting on the Edge

The Green Heron frequents areas with dense aquatic vegetation, including grasses, reeds, pickerel-weed, and mangroves. Unlike bitterns, it also hunts around the edges of these areas, and will even nest and hunt in isolated small ponds, as long as enough cover is present. Green Heron pairs usually nest on their own, although sometimes a few pairs will nest near each other. In contrast, the Great Blue Heron, Black-crowned Night-Heron, and many other herons often nest in large colonies called rookeries.

A Green Heron pair usually sites their nest in a dense tree or shrub over water, sometimes on an island emerging from a small wetland or drainage pond. Rarely, these birds nest on the ground. The male begins the stick platform, which the female finishes before laying usually three to five green or blue-green eggs. Both parents share incubation and feeding duties. From hatching to flight takes three weeks, although parents continue to feed young a few weeks beyond that time.

Birders often first notice a close-by Green Heron by its sharp “keow!” call, which often accompanies the bird taking flight, and also by a somewhat cuckoo-like “kuk”ing sound that wary birds make when someone approaches.

As summer wanes across much of their North American range, Green Herons move south. Many spend the winter alongside resident birds in Florida and along the entire edge of the Gulf of Mexico. Other birds continue farther south, wintering down to Panama and even northern South America. Some pass the cold months on Caribbean islands.

More than 60 heron species are known worldwide. Of these, the Green Heron is very closely related to two species: the widespread Striated Heron of warm, humid parts of South America, Africa, Asia, Australia, and many Pacific Islands; and the island-bound Lava Heron, a soot-colored species only found in the volcanic Galápagos Islands. Some experts, including those at BirdLife International, consider all three to be one species, the Green-backed Heron.

The Green Heron can be told from other North American herons by its rusty-colored neck, breast, and head, contrasted by a dark cap and dark green back. Additional features include a white line running from the chin down to the bird's belly, bisecting the rust on the head; the lead-gray belly; and the yellow lores — the area between the bird's piercing yellow eyes and its black-and-yellow bill. Immature birds' necks are streaked with white.

Habitat loss is the greatest threat to Green Herons. It is difficult to know how many Green Herons are out there — pairs often nest alone, widely dispersed, in well-concealed nests — but certainly the loss of wetlands impacts them, as does the “tidying up” of vegetation around ponds, streams, rivers, and lakes. ABC works with partners to ensure that wetland birds including the Green Heron continue to thrive, along with their habitats.

Overall, this species is considered to be in decline, but the overall population of this widespread heron remains robust enough that in most areas it does not require conservation attention. In the 2016 State of the Birds report, the Green Heron ranked a “concern score” of 11 out of 20, not warranting inclusion on the Watch List.