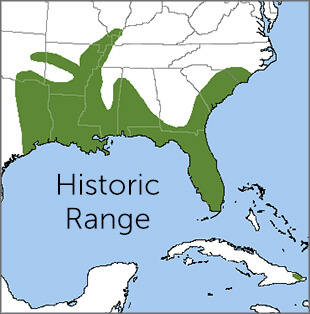 The largest of its tribe in the United States, the impressive Ivory-billed Woodpecker was also called the "Lord God Bird," after the typical reaction of people who saw it swoop into view. This charismatic species inhabited untouched bottomlands and swamps that once stretched across the southeastern United States.

These fabled hardwood forests, also the habitat of birds ranging from the Prothonotary Warbler to the Swallow-tailed Kite, were largely destroyed by loggers by the mid-20th century, and the Ivory-billed Woodpecker disappeared along with them.

The Ivory-billed Woodpecker was never a common bird, since it depended upon enormous, unbroken expanses of southern swamps providing the space and food it needed to thrive. Once its habitat began to disappear due to uncontrolled logging, the woodpecker became increasingly scarce. It was frequently shot by hunters and collectors, which likely contributed to its disappearance.

Some of the last confirmed sightings of the Ivory-billed Woodpecker came from the 81,000-acre Singer Tract of Louisiana, the largest piece of old-growth swamp forest left in the South. In 1935, Cornell professor Arthur A. Allen organized an expedition to the spot. The team included James Tanner, a graduate student, and bird artist George M. Sutton, an ornithologist and curator of the Cornell bird collection.

After three days in the swamp, the team found an Ivory-billed Woodpecker nest. They set up camp and captured motion picture footage and sound recordings of the woodpeckers. A few years later, James Tanner began a study of Ivory-bills as part of his Ph.D. dissertation and eventually wrote an in-depth report, funded by the National Audubon Society, that was later published as The Ivory-billed Woodpecker. His report estimated that only 22 to 24 of the birds remained in the United States.

Despite efforts by the National Audubon Society and other nascent conservation groups to buy the land for conservation, the lumber company that owned the Singer Tract refused to sell it, and that virgin forest was logged to the ground. A lone female Ivory-bill hung on for a few years at a roost hole in the area, but was last spotted in 1944 — the final universally accepted sighting of an Ivory-billed Woodpecker in the United States.

There was a Cuban subspecies of the Ivory-billed Woodpecker, which was found in mountain pine forests in the northeastern part of the island – but unfortunately, it is also believed extinct, again due to deforestation. The last confirmed sighting of this subspecies was in the late 1980s.

Like many woodpecker species, including the Red-cockaded Woodpecker and Hairy Woodpecker, the Ivory-billed Woodpecker was sexually dimorphic (males and females different in appearance). Both male and female Ivory-bills were crested, with the crest black in females and juveniles, and red and black in males. The species had a long, slender body and tail — the general impression more recalled a pintail duck than a woodpecker. Its plumage was striking as well, a glossy blue-black, with white markings on the neck and back, and extensive white on the trailing and forward edges of the underwing. Native Americans used its ivory-colored bill as ornamentation, and bills were traded in many parts of North America.

The Ivory-billed Woodpecker's call was a brief, nasal note, described as “kent,” and often compared to the sound of a tin horn or clarinet. It also made a distinctive double-knock sound as it hammered away at trees, characteristic of woodpeckers in the genus Campephilus. This double-knock can still be heard by birders in Central and South America, in forests inhabited by Ivory-billed Woodpecker relatives such as the Pale-billed, Powerful, and Magellanic Woodpeckers.

Like all woodpeckers, the Ivory-billed had a strong, straight bill with a long, barbed tongue. An important feature of this bill was its tip, which was flattened laterally like a beveled wood chisel. The Ivory-billed Woodpecker used its strong bill to peel the bark off dead trees in search of insects, particularly the large wood-boring beetle grubs it favored. Its genus name, Campephilus, means "lover of grubs," alluding to its preferred diet.

These big birds needed almost 10 square miles per pair to find enough food to feed their young and themselves, so they usually were found in low numbers, even in healthy populations.

The Ivory-billed Woodpecker is among 24 bird species in the Western Hemisphere considered to be "lost." These species receive Critically Endangered status from the International Union for Conservation of Nature — a designation that acknowledges that the species may not be extinct, but that it has no known surviving wild or captive populations. ABC is working to find some of these species through its Search for Lost Birds initiative.

In addition, ABC and conservation partners are working to save other Critically Endangered species, including the Stresemann's Bristlefront and Blue-eyed Ground-Dove, while there's still time. Each of these birds survives in a single locality, represented by fewer than 20 remaining individuals.