About the Jocotoco Antpitta

The distinctive Jocotoco Antpitta was unknown to science until 1997, when it was discovered in the wet, bamboo-choked mountain forests of southeastern Ecuador by Dr. Robert S. Ridgely and other researchers during an expedition to record bird songs. After hearing an unfamiliar call, Dr. Ridgely recorded it, then played it back … and a very distinctive, yet unfamiliar bird came sneaking through the bamboo thickets in response. Black-capped with a striking white cheek, this large brown antpitta with the onomatopoeic call turned out to be something entirely new to science.

The Jocotoco Antpitta's generic name Grallaria and its family name Grallariidae both come from the Latin grallarius, meaning "one walking on stilts." This is a perfect descriptor for the group of long-legged, stumpy-tailed, and ground-dwelling tropical birds that includes this species and the Ochre-fronted and White-browed Antpittas. The Jocotoco Antpitta's species name ridgelyi recognizes Dr. Ridgely.

The discovery generated great excitement in the ornithological community — and set off a series of events that boosted bird conservation in Ecuador, and indeed throughout Latin America.

This unique antpitta is named for its emphatic hooting call, described by local inhabitants of the area as sounding like "Jocotoco!" Its song is a drawn-out series of single hoots.

Listen to this species' namesake call, which led to the bird's discovery:

Star of the Feeding Station

Like other antpittas, the Jocotoco Antpitta forages on the ground, probing leaf litter and flipping vegetation with its bill and feet in the manner of an oversized Spotted Towhee or White-throated Sparrow. Although its diet has not been described in detail, the stomach contents of specimens have been found to contain earthworms, beetles, ants, millipedes, and other invertebrates. The Jocotoco Antpitta may associate with swarming army ants to snatch up insects and other small creatures disturbed by the predatory insects' activity.

Researchers have noted that the Jocotoco Antpitta seems to be attracted to the sounds of movement in thick vegetation, which has led to speculation that this bird may associate with large forest mammals such as bears or tapirs, for the same reason that it attends ant swarms. This antpitta can be easily habituated to humans and readily emerges from the thick forest understory to visit feeding stations baited with worms, to the delight of the hundreds of visitors who come to Tapichalaca each year.

The first Jocotoco Antpitta nest was discovered in 2008, when researchers found a mated pair of the birds attending a deep, open-cup structure of dead leaves about 11 feet above the ground against a rotting tree trunk, supported by bromeliads and a fallen branch. The nest was hidden within a thicket of bamboo, where the single nestling was being fed by both adults.

The Jocotoco Antpitta can be found only in a very limited range along the eastern slope of the Andes in southeastern Ecuador and northwestern Peru. It is a permanent resident, probably remaining in the same territory for many years. A rather solitary bird, it is usually seen alone or in pairs.

Conserving a Bird — and Saving a Landscape

The discovery of the Jocotoco Antpitta in 1997 inspired the creation of the Fundación de Conservación Jocotoco (Fundación Jocotoco) the next year. The foundation moved quickly to purchase and protect land where the antpitta was discovered, creating the Tapichalaca Reserve, which now covers more than 9,000 acres. In addition to protecting almost the entire known population of the Jocotoco Antpitta, the moss-laden mountain forests of the Tapichalaca Reserve provide refuge to other localized bird species such as the White-necked Parakeet, Gray-breasted Mountain-Toucan, and Masked Mountain-Tanager.

The reserve is a hotbed of species richness for amphibians, reptiles, and plants as well, with fauna and flora found nowhere else, including the Tapichalaca Treefrog (discovered in 2001) and around 30 orchids.

Fundación Jocotoco now administers 16 reserves around Ecuador, preserving over 60,000 acres of habitat targeted specifically to help conserve the country's most threatened bird species and their habitats. Fundación Jocotoco's approach has served as a model for threatened species conservation that has stimulated other groups in Latin America to use the creation of private reserves as a strategy to protect range-restricted species that are not always adequately protected in a country's national protected-area network.

Common Cause for a Rare Bird

Although surely benefiting from the conservation attention that followed its discovery, the Jocotoco Antpitta remains threatened throughout its tiny range by habitat loss and degradation from agriculture, logging, and mining. ABC has partnered with Fundación Jocotoco from its inception, supporting the creation of Tapichalaca and other reserves in Ecuador, which protect additional endangered bird species, including the El Oro Parakeet, Great Green Macaw, and Pale-headed Brushfinch.

With support from ABC and World Land Trust, Fundación Jocotoco has reforested more than 830 acres of the Tapichalaca Reserve with nearly 225,000 trees. Guards maintain feeding stations for the Jocotoco Antpitta and other species, as well as hummingbird feeders and nest boxes for Golden-plumed Parakeets. The reserve has a comfortable lodge for visitors, whose support helps to maintain this unique natural area. 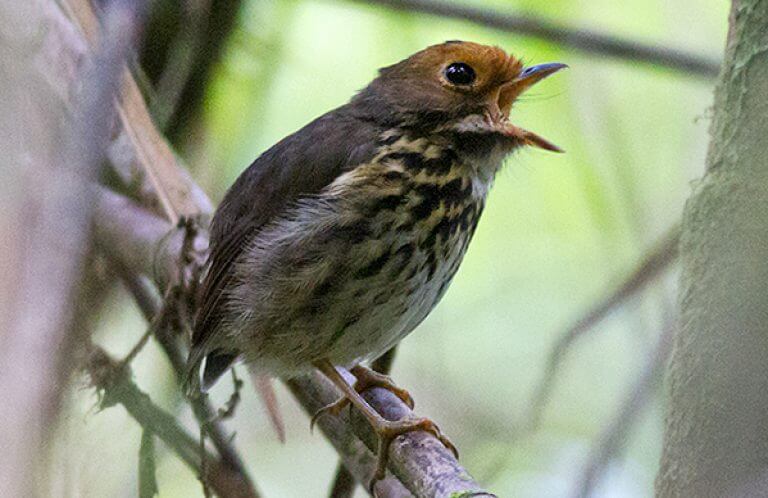