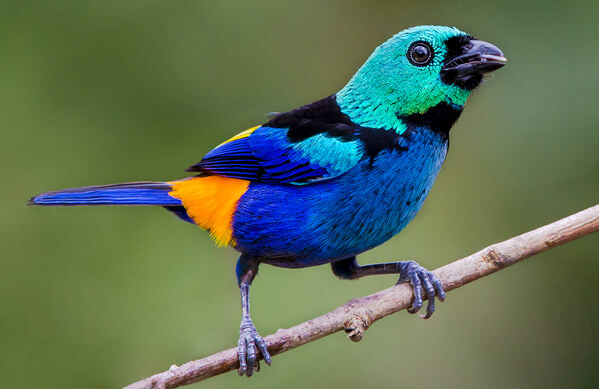 This tanager has a small, fragmented range and a declining population, due to continued habitat loss and capture for the cage bird trade.

Seven-colored Tanagers are usually seen in pairs or groups of up to four individuals, often in mixed-species flocks that forage through the forest canopy. Like other tropical tanagers, their diet is primarily made up of small fruits, berries, and seeds, plus the occasional insect.

The Seven-colored Tanager's favored habitat is humid Atlantic coastal forests in northeastern Brazil, but this habitat has become quite rare. Eighty-five percent of the original Atlantic Forest has been cleared, and what remains exists only in small fragments.

Other remnants of Atlantic Forest habitat are home to critically endangered birds found nowhere else, including Stresemann's Bristlefront and Banded Cotinga.

An important nesting requirement for the Seven-colored Tanager is the availability of trees with bromeliads, where the birds build their twig nests. Bromeliads require a high level of humidity, a state often found in mature forest but rarely in small fragments and edges. Unfortunately, the decline of these unique plants has a ripple effect through the rainforest, impacting birds and many other species.

Bromeliads that live on trees (also known as epiphytes or “air plants”) are an important contributor to diversity in tropical rainforests. In addition to providing nesting sites for some birds, hummingbirds like the Ruby-topaz visit epiphytic bromeliads for nectar and pollinate them in the process. Other birds use the silky filaments of bromeliad seeds to line their nests; eat the fruits of these plants; or find sustenance in the insects that live on them. Save It, and They Will Come

Although the IUCN Red List “downlisted” the Seven-colored Tanager from Endangered to Vulnerable in 2004, it is still perilously close to extinction, with the small remaining population continuing to decline.

Our partner SAVE Brasil is working to protect the most important forest fragment of northeastern Atlantic Forest—the Pernambuco area—by planting trees and protecting border areas of old-growth forest. In the last five years, staff have observed the Seven-colored Tanager's local range expanding into these new forested areas, and it appears that the population is also increasing in the ABC-supported Serra do Urubu Preserve.

Bennett Hennessey, ABC's Brazil Program Coordinator, notes, “I saw Seven-colored Tanagers foraging around the Serra do Urubu field station in a forest that had recently regenerated—an area that would have been unsuitable habitat before that time.”

We are now partnering with SAVE Brasil to expand the Serra do Urubu reserve by 181 acres. You can help us purchase this land and help save some of Brazil's rarest birds! Learn more.