"Bird on the Brink" The 'Akikiki is a five-inch-long songbird that creeps quietly over thick tree branches and slender trunks in its montane forest habitat. Although one of the less-colorful endemic Hawaiian forest birds, it's still a striking bird, grayish brown above and whitish below. Adults have a dark face, while immature birds have pale “spectacles.”

Based on fossil remains, scientists believe that this species once occurred at a variety of elevations; today, it is only found in the highest elevations on Kaua‘i.

The 'Akikiki is one of the Hawaiian honeycreepers, a dwindling group of songbirds that occur only on their namesake islands. From finches that arrived in the archipelago over 5 million years ago, the Hawaiian honeycreepers diversified to inhabit a wide range of habitats and fill different niches. Unlike the related 'I'iwi, Kiwikiu, and Palila, the 'Akikiki creeps along tree trunks and branches in pairs or family groups, behaving a lot like a nuthatch.

Once common on Kaua'i, the 'Akikiki is now one of the world's most critically endangered species. Fewer than 76 individuals are believed to remain, occupying an area less than 10 percent of the bird's original range.

Of many threats to the species, avian malaria — transmitted by non-native mosquitoes — is the most dire. Climate change is enabling mosquitoes to move into the highest elevations on Kaua'i, bringing the deadly disease to the 'Akikiki's last strongholds. There are no longer any high-elevation refugia on Kaua'i — nowhere is safe from mosquitoes.

But there is hope.

ABC and its partners in Hawai'i have launched a multi-agency partnership called “Birds, Not Mosquitoes,” which aims to reduce avian malaria across thousands of acres by rendering male mosquitoes sterile. Scientists plan to transfer naturally occurring “birth control” bacteria called Wolbachia to local male mosquitoes in a lab. Once released, the males will mate with wild females, but the eggs won't hatch — leading to a reduction in disease-carrying mosquitoes over time.

This method to control mosquito populations is already being used in 14 countries, including the United States, to help control human diseases transmitted by the insects.

'Akikiki vocalizations include sweet tweets given between long pauses, and a song comprising a brief downward trill. It is often easier to identify this bird by sight than by its calls, which are very similar to those of several other native honeycreepers.

Listen to the call here:

Only a few studies have been conducted on this species, and very few nests have ever been discovered. Those found have been high in native 'ōhi'a trees. The small structures are made of moss, bark fragments, lichen, and plant fibers. The female lays one to two eggs per year. Following the nestling stage and after fledging, juvenile birds follow their parents for up to three months.

With their straight, pinkish bills, 'Akikiki peck and tug at bark in search of insects and other invertebrates. They usually travel in small flocks.

While it once was found at other places on the island, the 'Akikiki now occurs only in a small central portion of Kaua‘i's highlands, at and above 3,900 feet elevation. Its remaining habitat totals fewer than 4,400 acres — less than seven square miles.

Conservation of the 'Akikiki Unfortunately, disease-carrying mosquitoes are not the only invasive species posing major problems for the 'Akikiki. Introduced plants crowd out native species favored by this bird for foraging, and non-native animals such as rats pose a significant danger to the birds' eggs and chicks. Meanwhile, pigs and goats destroy 'Akikiki habitat.

ABC's Hawai'i Program has made the conservation of the 'Akikiki and other endemic Hawaiian forest birds a top priority. If mosquito “birth control” efforts succeed — and ABC and partners believe they will — a day may come when rare endemic birds such as the 'Akikiki will not only rebound at high elevations, but also expand back into lower-elevation habitats.

Outside the islands' forests, ABC and partners are also working to save other species that nest only in Hawai'i, including the Newell's Shearwater. 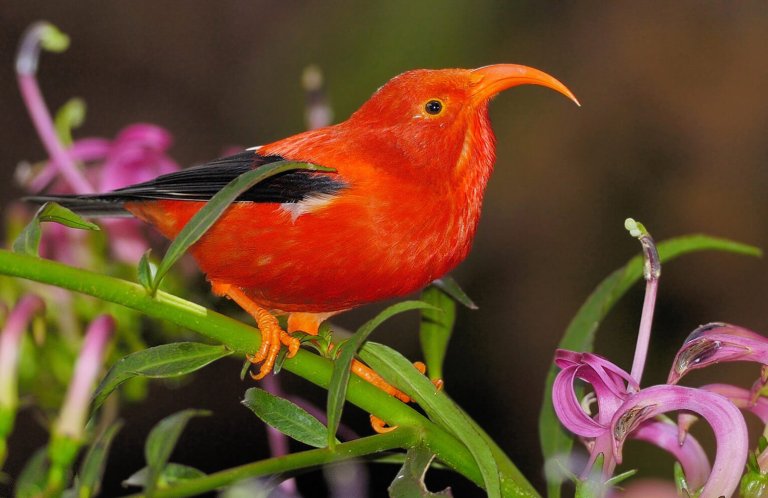