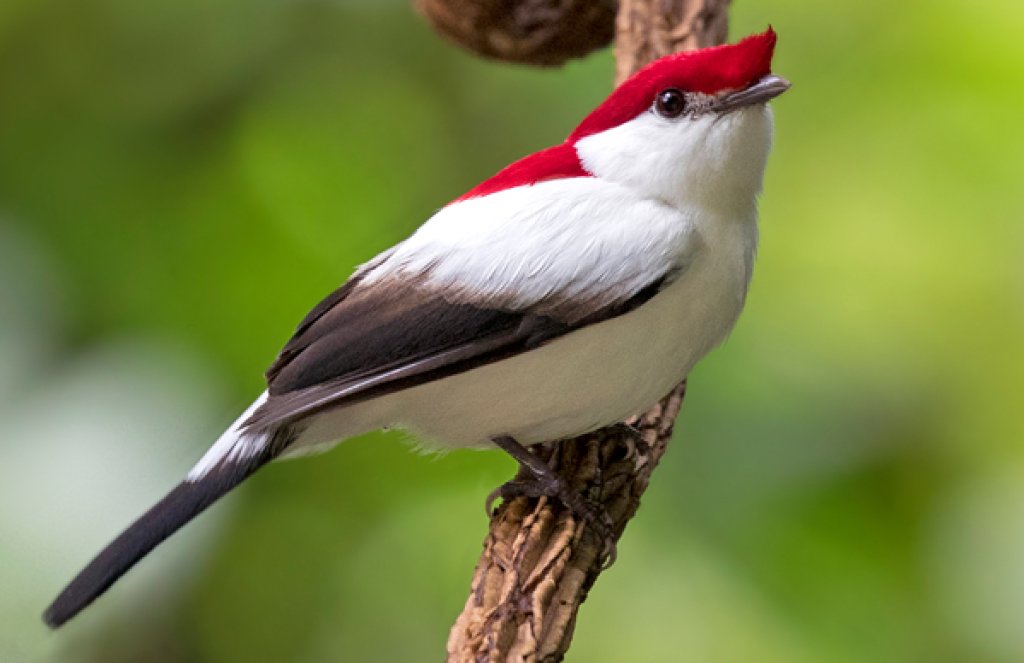 About the Araripe Manakin

The spectacular Araripe Manakin was only discovered in 1996. Like others in its family, including the Pin-tailed and Club-winged Manakins, females and males look very different — the male is an eye-catching white, red, and black with a forward-sweeping red crest, while the female is dull olive-green, with a small tuft atop her head. The male's bright, helmet-like crown led to its Portuguese nickname soldadinho-do-araripe, "Little Soldier of Araripe."

Other local nicknames for the Araripe Manakin hint at the bird's specialized and very limited habitat.

Owner of the Waters

Local legend tells of a red-headed bird living by forest springs and streams at the foot of the Araripe Plateau in northeastern Brazil. This bird, known as the galo de nascente (cock of the springs), must not be hunted, as it is o dono do agua — owner of the waters. If this bird is hurt in any way, the story goes, the springs essential to life in the surrounding dry lands will stop flowing.

The male Araripe Manakin's song is a fluting, multi-noted whistle.

This "owner of the waters" appears to rely on seasonal rainfall to trigger the start of its breeding cycle. Like many hummingbird species, such as the Swallow-tailed Hummingbird and Marvelous Spatuletail, the male Araripe Manakin defines and defends a territory and mates with a female, but takes no other role in nesting and raising young.

The female Araripe Manakin builds her nest in a streamside shrub, often just above the water. The pouch-like nest is made of rootlets, dry twigs, and lichens, bound together with elastic spider webs and camouflaged on the outside with dead leaves. Once the nest is complete, the female lays a clutch of two eggs, then does all the incubating and chick-raising herself, while the male continues to guard the territory.

The Araripe Manakin's diet consists of small fruits and insects, taken while hanging upside-down or in aerial sallies. Fruit comprises the majority of this bird's diet. Although females have a more diverse diet, males consume more beetles, and studies suggest that these carotenoid-rich invertebrates help male Araripe Manakins maintain their eye-catching red plumage accents. (Carotenoids also help boost color in many other bird species, such as the Northern Cardinal, American Goldfinch, and Blackburnian Warbler.)

In the Dry Northeast

This species only occurs in a tiny area of northeastern Brazil, in low to mid-levels of riverbank “gallery” forest watered by spring-fed streams. These streams continue into surrounding dry shrubland and thorn forest known as Caatinga. ABC Brazilian partner Aquasis manages a critically important reserve for the manakin (see Conservation, below), which is called Oasis Araripe because the area truly is an oasis of lush forest surrounded by Caatinga.

Conservation of the Araripe Manakin

The Araripe Manakin is threatened by habitat loss due to agriculture and human settlement. Diversion, channeling, and piping of the springs and streams are also reducing the area of available gallery forest habitat.

This bird is ranked both as a Critically Endangered species by the International Union for Conservation of Nature (IUCN) and as an Alliance for Zero Extinction (AZE) “trigger” species — a designation only given to highly localized species that will likely go extinct if they lose their last remaining one or few sites. In 2014, ABC helped Aquasis purchase 140 acres of critical habitat in a prime breeding area for the Araripe Manakin. Four years later, the partners acquired an additional 170 acres, more than doubling the size of the existing reserve and connecting it to the much larger Araripe National Forest, protecting new breeding territories for this and other rare species, including the Yellow-faced Siskin.

With ABC support, Aquasis and the Araripe Manakin Conservation Project run an experimental tree nursery, control invasive plants, and are beginning a long-term habitat restoration initiative with local partners. These conservation efforts will help preserve not only the Araripe Manakin, but also other species that share its restricted habitat, such as the Silvery-cheeked Antshrike and White-browed Antpitta. 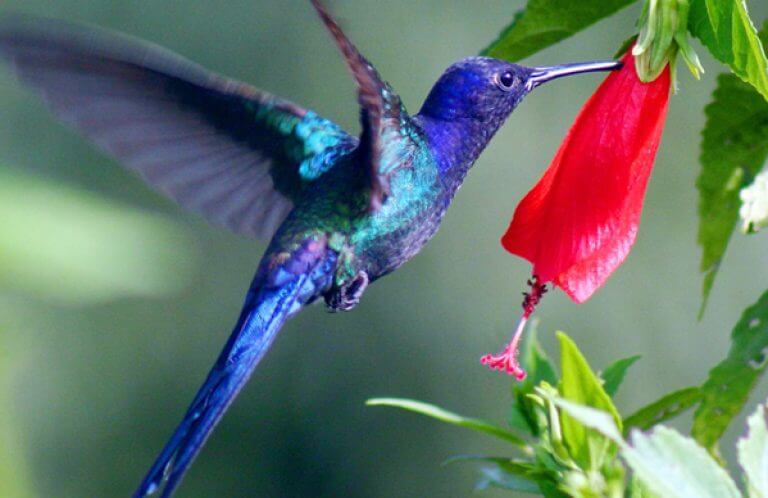