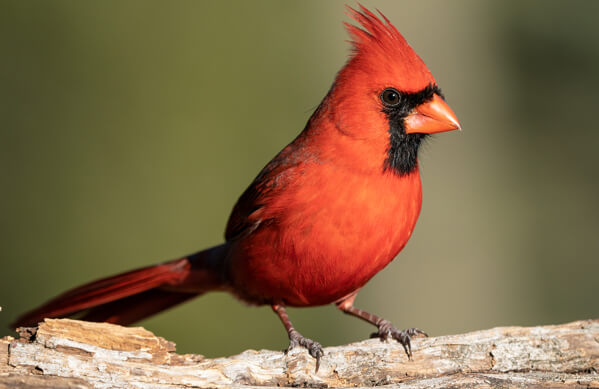 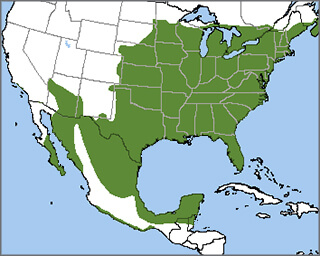 In the East, few birds are as familiar and well-loved as the Northern Cardinal. The male "Redbird" is unmistakable, with a distinctive crest and vivid red plumage, which is rivaled perhaps only by the Scarlet Tanager or Vermilion Flycatcher. The female's plumage of brown with red accents is more subdued, but she sings just as beautifully as her mate.

The cardinal is a popular motif on many bird-themed decorations, holiday cards, and ornaments. It even features as a main character in a popular video game-turned-movie. The species' eye-catching plumage and wide distribution also helped land the Northern Cardinal the title of “most popular state bird,” since the following seven states declare it the official bird (the most for any species): Illinois, Indiana, Kentucky, North Carolina, Ohio, Virginia, and West Virginia. It's also a popular sports mascot, from Missouri (the St. Louis professional baseball team) to Arizona (professional football team), and at countless colleges and high schools.

The Northern Cardinal's bright red plumage reminded early European settlers of the cardinals of the Roman Catholic Church, high-ranking bishops who wear red robes and caps. Both this bird's common name and its scientific moniker Cardinalis cardinalis refer to these church officials. A group of Northern Cardinals is called a "college," "conclave," or "Vatican." The Prothonotary Warbler's name also refers to robe colors — in this case, yellow — worn by Catholic Church officials, the chief notaries.

Widely distributed in the East, the Northern Cardinal can be admired from southeastern Canada south through the eastern and central United States. It also occurs in southern Arizona and New Mexico, as well as in most of Mexico and in northern Belize and Guatemala. It is an introduced species in Hawai'i, southern California, and Bermuda. The Northern Cardinal's range continues to expand in many areas due to climate change and sprawling suburbs (with birdfeeders), where these birds thrive. The Northern Cardinal does not migrate, so its beautiful songs and bright color can be enjoyed year-round.

Eighteen Northern Cardinal subspecies are recognized, further divided into two groups based on color, crest size, and bill shape. Other distinctions occur with regard to song "dialects" and flocking behavior during the winter.

The female cardinal sings duets with her mate during courtship and while she's on the nest. During that time, her singing tells her mate when to bring food — and also when to stay away. This warning keeps the more conspicuous male's visits to a minimum, lest his flashy color expose the nest to predators.

The Northern Cardinal is granivorous, or grain-eating, and well-equipped to handle this diet thanks to a conical, seed-cracking bill, similar to those of other seed-eating birds, such as the Rose-breasted Grosbeak and Dickcissel. It also eats fruits, including berries, and insects as they are available — a dietary flexibility that allows this species to remain in the same area year-round. Invertebrates provide essential protein for fast-growing nestlings during the breeding season.

The cardinal's rich red coloration is due to carotenoids acquired by eating fruits, such as wild grapes and dogwood berries, or drupes.

A male cardinal will doggedly defend his territory during the breeding season, chasing away intruders and even, mistakenly, attacking his own reflection in car mirrors, windows, and other reflective surfaces, sometimes for hours at a time. Females also show this aggressive behavior. During the winter, however, Northern Cardinals congregate in loose flocks that feed together.

Northern Cardinals are monogamous, sometimes remaining together throughout the winter and for successive years. The male feeds the female as part of courtship, and mated pairs can often be spotted feeding together.

The Northern Cardinal's brilliant plumage and sweet songs made it a popular cage bird in the 1800s. Fortunately, it is now protected in the U.S. by the Migratory Bird Treaty Act and other legislation.

Like Steller's Jays and Blue Jays, the Northern Cardinal seems to thrive in human-altered habitats. Although common and widespread, it is still vulnerable to many of the same factors threatening less adaptable species, particularly predation by cats, pesticide poisoning, and collisions.

ABC has a number of programs in place to tackle these threats, including our Cats Indoors program, which encourages pet owners to keep cats and birds safe, and our Glass Collisions program, which offers solutions to birds hitting windows. You can also learn how to make your backyard more inviting to Northern Cardinals and other birds by planting native trees and shrubs, keeping feeders clean and stocked with appropriate foods, and providing a source of clean water.