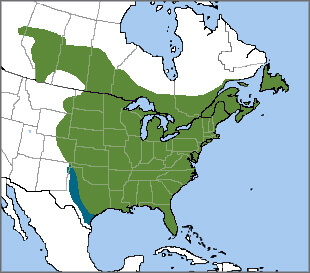 The brash and beautiful Blue Jay is seldom regarded with indifference. Some think it's an aggressive bully, while others love its boisterous, sociable nature. A member of the Corvid family, related to the Common Raven and Green Jay, the Blue Jay is intelligent and adaptable — qualities that have helped it learn to successfully co-exist with people.

Although not as talented a mimic as Northern Mockingbird or Gray Catbird, a Blue Jay can produce a convincing imitation of Red-shouldered Hawk and Red-tailed Hawk, confusing many a birdwatcher.

Blue Jays are known to imitate a variety of other bird species, including the Bald Eagle and Eastern Screech-Owl. This noisy bird also utters a wide variety of squeaks, rattles, and croaks. Compare the Blue Jay's many calls below.

Although Blue Jays appear to be brilliantly blue, their feathers are actually a dull brown. Like the Eastern Bluebird and the Indigo Bunting, their feathers have modified prismatic cells that scatter light waves, reflecting the blue spectrum waves to the viewer.

The Blue Jay is common in much of eastern and central North America, and this adaptable species continues to extend its range to the Northwest. It's usually found in pairs, family groups, or small flocks. Four subspecies of Blue Jay are recognized, with only subtle differences distinguishing them.

Blue Jays are migratory in the northern part of their range but do not typically travel long distances. Their migratory behavior remains somewhat mysterious, as some individuals may migrate one year and not the next. When Blue Jays do migrate, they fly during the day, traveling in loose flocks that can number up to 250 birds. They are one of the few passerines (perching birds) that you can observe migrating.

The Blue Jay is an omnivore, with a diet that varies according to the time of year. It is particularly fond of acorns — a jay will use its strong feet to grip a nut, then hammer it open with its heavy black bill to get at the meat inside.

In the fall, Blue Jays can often be seen gathering nuts. They hold the nuts in their expandable throat pouches, fly to a storage area, then stash the nuts for winter food. Sometimes jays will forget a few acorns; in this way, they help re-seed the forests. They cache other nuts and seeds as well.

Although Blue Jays will plunder the nests of smaller bird species for eggs and even hatchlings, they mostly confine their protein intake to insects, small animals, and even carrion. Blue Jays are quick to exploit forest fragments, since the expanded edge habitat provides greater chances for them to find prey. Other bird species are especially cautious of Blue Jays during nesting season and will mob them while protecting their eggs and young.

The clever Blue Jay is a frequent backyard bird feeder visitor; it will also eat pet food left outside and has even been observed predating smaller birds stunned or killed by window strikes. Sometimes Blue Jays will imitate hawk calls to startle other birds into dropping or abandoning food, which the jay then grabs.

Despite their bold ways, Blue Jays are faithful mates, usually staying together for life. A mated couple shares the work of building their bulky stick nest; the male brings the female food as she incubates the eggs. He continues to feed the female and chicks for the first few days after hatching. Once the chicks fledge, they stay with their parents as a family group throughout the summer and fall.

Blue Jay pairs will sometimes refurbish and reuse old nests, or even use a nest built by other individuals.

Unlike many other birds, the Blue Jay seems to thrive in human-altered habitats. The species is still common, but it's vulnerable to the same threats that face less adaptable species, particularly predation by cats, pesticide poisoning, and collisions.

Fortunately, ABC has a number of programs in place to tackle these threats, including our Cats Indoors program, which encourages pet owners to keep cats and birds safe, and our Glass Collisions program, which offers solutions to birds hitting windows.