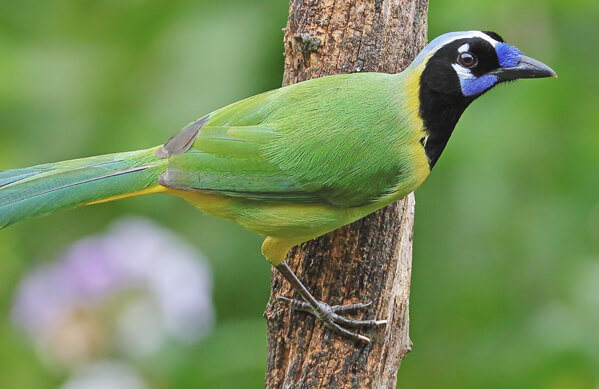 The brilliantly colored Green Jay brings a bright splash of blue, green, and yellow to the dry scrub of South Texas – the only place in the United States where it can be found. This lovely jay rivals the Painted Bunting or Scarlet Tanager in any bird beauty pageant; many believe it equally as beautiful as colorful South American species such as the Green-headed Tanager or Lear's Macaw.

Populations of Green Jay occur across the border in Mexico and far south of the United States, and a Green Jay seen in South America looks quite different from an individual spotted in South Texas. Are these South American birds actually a separate species?

Seven Green Jay subspecies are recognized in North and Central America alone. In South America, Green Jays are found in a separate population that ranges from Venezuela to Bolivia. This southern population appears to be very different, with colors, calls, and habitat preferences so distinct that some ornithologists have reclassified these Green Jays as a separate species – the Inca Jay. All Green Jay populations are nonmigratory.

While the jury is still out on the Green Jay's taxonomic status, some facts about the bird are indisputable. Like the Common Raven, crows, and other jay species, the Green Jay is a sociable, clever bird that can mimic other species and even uses tools – it has been observed using twigs to dig insects from beneath bark.

Green Jays are omnivorous, able to have a varied diet depending upon food availability and preference. In addition to insects, a Green Jay's diet may include small lizards and snakes, rodents, and amphibians; bird eggs and nestlings; fruit, berries, and nuts; and even human garbage. They usually forage in small flocks, and will use a variety of feeding techniques depending upon the situation and the potential food item.

All in the Family

Another trait that Green Jays share with many jays and crows is communal nesting, with young birds from the previous year's brood staying with their parents to help defend territory. In some South American Green Jay populations, these young "helpers" may even assist with nest-building and feeding the chicks. Although the Green Jay is still considered common, some populations face very specific challenges. The South Texas population is regularly parasitized by the Bronzed Cowbird, which may limit the jay's numbers in that state – a scenario also faced by rarer Texas breeding birds such as the Golden-cheeked Warbler and Black-capped Vireo. However, Texas Green Jays have been expanding their range northward over the past 40 years – mostly likely due to effects of climate change. This northward expansion may mitigate the "cowbird effect.”

Proposed plans for a border wall between the United States and Mexico may also affect Green Jays, as portions of that wall might be built through the Santa Ana National Wildlife Refuge and other protected areas, degrading and even destroying important habitat for this species and many others besides.

ABC urges concerned citizens to contact their members of Congress and urge them to oppose a border wall crossing the Santa Ana National Wildlife Refuge, or any other lands designated as protected areas for wildlife.