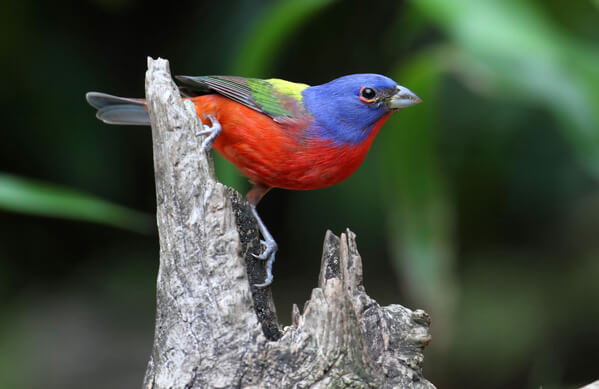 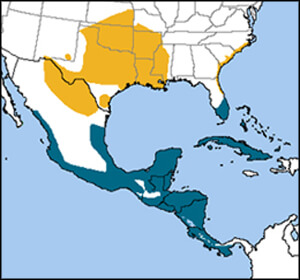 The adult male Painted Bunting is one of the most colorful of all U.S.-breeding birds, rivaling South American tanagers like the Gilt-edged Tanager and Green-headed Tanager. In Mexico, the Painted Bunting is commonly known as siete colores, or “seven colors”; in Louisiana it is called nonpareil, French for “without equal.” Both are fitting terms for this gorgeous bird.

Like other colorful species such as the Red-masked Parakeet, Lear's Macaw, and Banded Cotinga, the Painted Bunting is a popular cage bird and is heavily trapped on its wintering grounds, particularly in Mexico.

One of the biggest factors in Painted Bunting decline is habitat loss, both on its breeding grounds and at migration stopover sites. The species is also a frequent victim of window collisions and is vulnerable to cowbird parasitism.

There are two separate breeding populations of Painted Bunting in the United States, one in the south-central U.S.; the other along the Atlantic Coast from North Carolina to central Florida. This species winters in Florida, the Bahamas, Cuba, and Mexico south to Costa Rica and western Panama.

Painted Buntings are known to wander widely outside of the breeding season, as illustrated by the bird that spent the winter of 2015 in Central Park, New York.

Interestingly, the western population of Painted Bunting begins its fall migration before molting, then molts at staging areas before continuing its journey farther south. This migration-molt pattern is common among waterfowl but very rare among songbirds. The eastern population molts on its breeding grounds before migration, the more usual pattern. 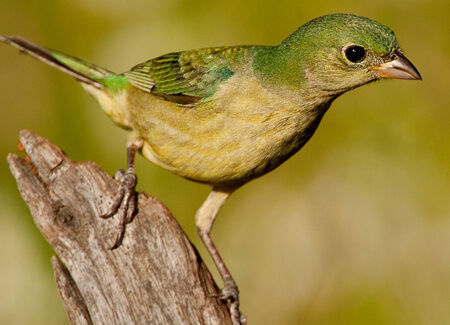 The female Painted Bunting is strikingly different from the male. Photo by Owen Deutsch.

Like other closely-related species such as the Varied Bunting, this bird's diet consists mostly of seeds, supplemented by high-protein insects during nesting season. Despite the males' bright colors, Painted Buntings are often hard to see outside of the breeding season since they prefer to lurk low in the dense cover of brushy areas and woodland edges.

On the breeding grounds, male Painted Buntings stake out territories of up to several acres through song and displays. Each male aggressively defends its territory and will fight intruding males by pecking, grappling, and striking with their wings. These fights sometimes end in the death of one of the males.

The lime-green female builds a cup-shaped grass nest in a small tree or shrub, where she lays three to four eggs and up to three broods each year. Chicks are fed by the female and fledge when they are 12-14 days old.

Juvenile males are the same green as the females until the fall of their second year, when they finally molt into their bright colors.

Stepping Up to Save Migratory Birds

ABC's Migratory Birds Program is collaborating with partners throughout the Americas to conserve habitat for bird species of conservation concern throughout their life cycles. Nine focal geographies have been initially established, including habitats essential to the Painted Bunting as well as the Wood Thrush, Rufous Hummingbird, Long-billed Curlew, Golden-winged Warbler, and many other birds.

Our Bird-Smart Glass Program, part of ABC's larger strategy for addressing the deadly problem of bird collisions, offers ways that homeowners, building supervisors, and architects alike can make glass buildings safer for migrating birds such as the Painted Bunting.