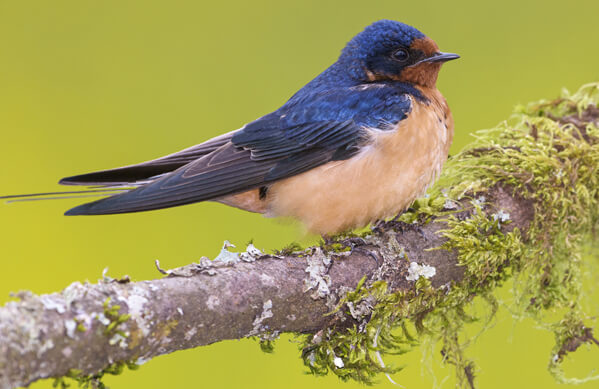 "Everybody who notices birds at all knows, admires, and loves the graceful, friendly barn swallow," wrote ornithologist Arthur C. Bent in the early 20th century, in his Life Histories of Familiar North American Birds. "No bird in North America is better known as a welcome companion and a useful friend to the farmer, as it courses  about the barnyard in pursuit of the troublesome insects that annoy both man and beast."

This metallic-blue-backed "country swallow" — a literal translation of its Latin name — is a familiar sight on farms and in other rural habitats around the world. This distinctive feature is associated with an interesting folklore: A Barn Swallow stole fire from the gods to bring it to the people on Earth. One particularly angry god threw fire arrows at the swallow as it fled, singeing off the middle of its tail. The result was the Barn Swallow's distinctive, fork-tailed profile!

The Barn Swallow seems to benefit from life around people, as long as its prey remains abundant. The species is found around the world, as are the Short-eared Owl, Golden Eagle, Dunlin, and a handful of other bird species.

At least six Barn Swallow subspecies are recognized, with just one in the Americas. Hirundo rustica erythrogaster breeds from southern Alaska and northwestern Canada to Mexico, and winters from Mexico to Tierra del Fuego. The other five subspecies breed across Europe and Asia, migrating to southern Africa and Asia for the winter.

Barn Swallows breeding in the Americas winter in the Neotropics, traveling as far as much larger birds such as the Red Knot and Osprey. These small, roughly sparrow-sized birds fly up to 600 miles each day, moving in large flocks that feed on the fly.

Like the Chimney Swift and Purple Martin, Barn Swallows live much of their life on the wing, drinking, feeding, courting, and even mating in mid-air. They are acrobatic fliers, making sharp twists, turns, swoops, and lunges, often just above the ground, in pursuit of their insect prey. Flies are a favored food, along with beetles, wasps, butterflies, moths, and bees. To drink, Barn Swallows swoop down, level out, and skim the water's surface.

Although they once used caves and cliffs to nest, modern-day Barn Swallows now breed almost exclusively in and around man-made structures, including bridges, barns, garages, and culverts. Pairs may nest in close proximity, but Barn Swallows don't form large colonies as do martins and some other swallow species.

Both parent birds cooperate in nest building, a process that involves thousands of trips to gather mouthfuls of mud used to build a sturdy structure that may be reused from year to year. The birds line the cup-shaped mud nest with grass and feathers; when reusing nests, Barn Swallows clean out the old nest lining and add new mud to the nest's rim. Barn Swallows usually produce two broods per season. Fledglings from the first hatching, sometimes joined by unrelated swallows, may join in to help raise the second brood. These birds are aggressive nest defenders and will mob potential predators that approach too closely.

In an interesting symbiosis, Barn Swallows sometimes nest just below Osprey nests. As the Osprey defends its own nest and young from predators, it also provides protection for the swallows. In turn, the Barn Swallow's high-pitched, twittering alarm calls likely alert the Osprey to intruders.

Although still abundant and widespread, Barn Swallow populations in the United States and Canada have shown a cumulative decline of 38 percent since 1970, according to the Partners in Flight 2016 Landbird Conservation Plan.

Like other aerial insectivores (birds that feed on airborne insects) — including swifts, swallows, the Common Nighthawk, and the Olive-sided Flycatcher — Barn Swallows face threats from widespread pesticide use, including the neonicotinoid insecticides, which are decimating insect prey on the swallows' breeding and wintering grounds. Since they often live in close proximity to people, Barn Swallows are also frequent victims of outdoor cats.

Many ABC programs address the threats faced by still-common species such as the Barn Swallow. ABC has been instrumental in the cancellation of more than a dozen pesticides harmful to birds; our 2013 study on neonicotinoids helped persuade retailers like Home Depot and Lowe's to phase out neonicotinoid-treated plant products from their stores.

Our Cats Indoors program offers solutions to the challenges created by free-roaming cats, educates the public and policymakers, and advocates for responsible pet ownership. Please visit and share our page on keeping cats contained and happy while keeping wildlife safe.