About the Black-throated Blue Warbler

Unlike more elusive species such as Kentucky and Swainson's Warblers, the beautiful Black-throated Blue Warbler is remarkably tame and often easy to see. Sometimes, it will even forage low in the underbrush within a few feet of enthralled onlookers.

The Black-throated Blue Warbler's species name is the Latin adjective caerulescens, which means “turning blue.” The male embodies this name perfectly, with dark blue plumage on its back contrasting with a clean white underside and black face, throat, and flanks. However, the female is a nondescript olive-brown. Fortunately for birders, there is one small but significant field mark that can usually clinch a Black-throated Blue Warbler identification — for adults of both sexes.

ID in the Pocket

Despite their drastic differences in appearance (known as sexual dimorphism), adult male and (most) female Black-throated Blue Warblers have a white base on their primary feathers, which forms a distinctive “pocket handkerchief” marking — and an almost foolproof field mark.

The male Black-throated Blue's song, which sounds like zoo-zoo-zoo-zeee, has a distinctive buzzy quality and upward inflection. It is also rather slow-paced and often described by birders as “I'm so lazeeeeeee.”

Male Black-throated Blue Warblers arrive on the breeding grounds first, staking out, advertising, and defending territories through song and direct attacks on intruders, if necessary. Females arrive soon after. After females choose mates, pairs remain monogamous during the breeding season, and will often return to nest in the same area in succeeding years.

The female Black-throated Blue builds a cup-shaped nest of leaves, bark strips, and grasses, lined with softer materials such as spider webs and animal fur. The male assists by bringing nest materials to the female as she builds. The nest site is usually in a thick shrub or dense stand of saplings, within six feet of the ground. The female lays three to five eggs, which she incubates for 12 to 13 days. After the young hatch, both parents supply food, and the male often continues to feed the young after they fledge, while the female begins another nest. This warbler can raise two or three broods per summer if nesting conditions are ideal.

During the nesting season, the Black-throated Blue feeds almost exclusively on insects including caterpillars, moths, and flies, plus spiders. It forages by hopping and hovering to glean prey from the underside of leaves. Since this species concentrates its feeding activity in the shrub and lower canopy levels of the forest, it can easily share habitat and resources with ground-feeding birds such as the Hermit Thrush and Ovenbird, and canopy feeders such as Black-throated Green and Blackburnian Warblers.

On its wintering grounds, the Black-throated Blue Warbler adds seeds, berries, small fruits, and flower nectar to its diet. It may even visit hummingbird feeders for sugar water.

The Black-throated Blue Warbler, like the Canada Warbler and Wood Thrush, is a bird of the forest interior, preferring closed-canopy deciduous woods with a dense understory.

Two subspecies are currently recognized: One, found only in the Appalachian Mountains, nests in deep thickets of rhododendron and mountain laurel. Males of this subspecies have black streaks on their blue backs, unlike the solid blue backs of the other subspecies, which nests in forests across a wider swath of the eastern U.S. and Canada. Much of the population winters in the Caribbean, but this species is also sparsely distributed in winter on the mainland, from the Yucatán Peninsula south to Panama.

Like many other Neotropical songbirds, the Black-throated Blue Warbler is a medium- to long-distance migrant. It migrates at night, usually east of the Mississippi River, often in small groups. During migration, this warbler can be found in a variety of forested and shrubby habitats.

The Black-throated Blue Warbler also prefers forests with dense undergrowth on its wintering grounds. It also is frequently found wintering on shade-coffee farms, along with other migrants such as the Magnolia Warbler. Male and female Black-throated Blues use slightly different habitats during the winter: Studies in Puerto Rico and Jamaica showed that males were most common in forest at lower to mid-elevations, while females used shrubbier habitat at higher elevations.

Conservation of the Black-throated Blue Warbler

Although the Black-throated Blue Warbler population is considered stable, these birds are often victims of collisions with glass, communications towers, and other human-made structures, especially during migration. Deforestation on nesting and wintering grounds is also a threat. 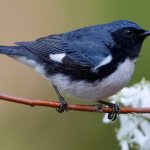 The Black-throated Blue Warbler benefits from ABC's efforts to "bring back the birds," with our focus on conserving geographically linked habitats — boreal forests where these birds breed, and places where they overwinter. ABC is working with partners to help manage these lands, both for birds and for people.