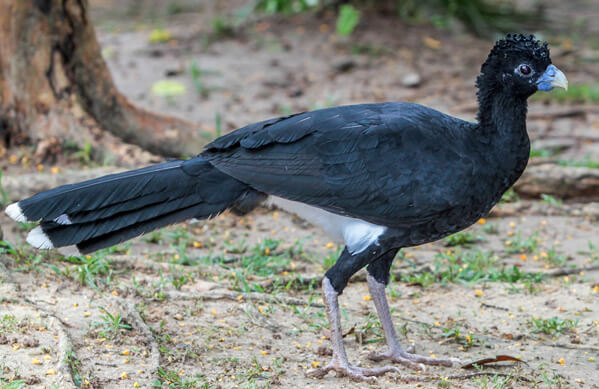 The enigmatic Blue-billed Curassow, locally known as Paujil, is a member of the family Cracidae, which includes large, ground-dwelling tropical birds such as the Great Curassow, guans, and chachalacas. This turkey-sized bird is one of the most endangered in the Americas, a victim of overhunting and habitat loss.

Males are black with a blue cere (the fleshy covering on the upper bill) and wattle, while females are barred black-and-white above, with chestnut undersides. Both sexes sport crests of curly feathers.

Local folklore explains that curassows got their curly crests when they stole fire from the Jaguar and gave it to humanity. As the curassows carried a burning log on their backs, the flames burned their crest feathers into crisp curls.

Although the Blue-billed Curassow is sometimes seen at other sites in Colombia, the Alliance for Zero Extinction has recognized the Serranía de las Quinchas area in the Magdalena Valley as most critical for the continued survival of this species, as this area appears to be home to the bird's last viable population.

Male Blue-billed Curassows make a low, booming call, which may serve to ward off rival males, attract a mate, or help maintain a current pair bond. Both sexes also give a soft, high-pitched whistle.

The Blue-billed Curassow spends most of its time foraging on the forest floor for fruit, seeds, small invertebrates, and even carrion. Like the Channel-billed Toucan and Bearded Bellbird, it provides valuable natural service as an important disperser of seeds within its lowland forest habitat. At night, this large bird roosts in trees, usually near feeding areas. These nocturnal roosts are often used for several days in a row.

Blue-billed Curassow pairs breed once a year during Colombia's dry season, which generally runs from mid-December to early March. Their large nests, made of sticks and dead leaves, are concealed from predators within dense tangles of brush and vines, two to 15 feet above ground. The female lays two to three eggs, then incubates them for a little over a month. Typically, one or two young hatch successfully. Like the Gorgeted Wood-Quail, Ocellated Turkey, and other precocial bird species, Blue-billed Curassow chicks hatch fully feathered and with eyes open. They leave the nest quickly but remain close to their parents for several months.

Deforestation and hunting are the main threats to the Blue-billed Curassow. In Colombia's Magdalena Valley, where most of the species' population remains, lowland forests have been razed to create clearings for agriculture, livestock, oil extraction, and mining.

In 2004, ABC teamed up with partner Fundación ProAves in an effort to save habitat for this species, establishing the El Paujil Reserve in the Magdalena Valley. In 2010, the reserve was expanded to almost 15,000 acres, further protecting this bird and other endangered residents such as the White-mantled Barbet and Antioquia Bristle-Tyrant, along with wintering migrants such as Cerulean and Canada Warblers. Thanks to protection, Blue-billed Curassows now frequent the area around the reserve's lodge, thrilling visiting birders and photographers.

ABC recently collaborated with conservation organization Fundación Biodiversa Colombia and other partners to add 3,839 acres to the El Silencio Natural Reserve, connecting two important forest remnants in the Magdalena Valley and doubling the reserve's size to 6,844 acres. El Silencio provides another important stronghold for the Blue-billed Curassow and a variety of other endangered and endemic animals, as well as important winter habitat for the Prothonotary Warbler.