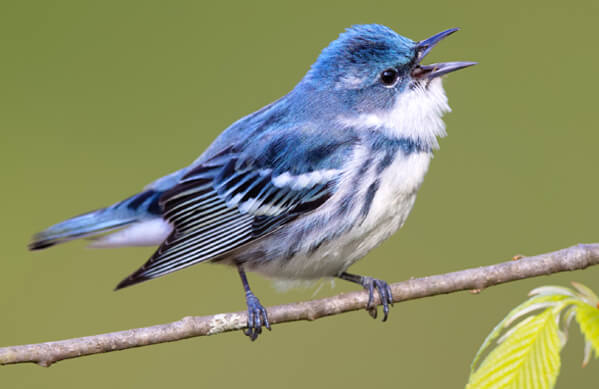 About the Cerulean Warbler

The male Cerulean Warbler is an eye-catching bird, named for the lovely blue of its back and head. Other identifying marks include black-streaked white flanks, a bold white eyebrow, white wing bars, and a black "necklace" that separates its white throat and belly. The female is bluish-green above, with a yellowish face, throat, and eyebrow.

The species name, cerulea, derives from the Latin word caeruleus, which means “sky blue.” John James Audubon also gave a nod to the male's color, naming it the "Azure Warbler" in his Birds of America.While some blue birds, such as the Indigo Bunting and Blue Jay, can be fairly easy to find, spotting a Cerulean Warbler high in the forest canopy takes work. Cerulean-finding essentials include knowing where to look and what to listen for, and having a flexible set of neck muscles!

Songs and Sounds of the Cerulean Warbler

The Cerulean Warbler's song, voiced only by the male, is a series of buzzy notes on the same pitch, followed by a higher, drawn-out buzz. This song is somewhat similar to that of the Black-throated Blue Warbler, but faster in tempo. While the Black-throated Blue is not a treetop singer, the also-buzzy Northern Parula is. Northern Parulas are often heard singing simultaneously in the canopy with Ceruleans.

See if you can tell the difference between these three:

The female Cerulean Warbler uses a strategy known as "bungee-jumping" to hide her nest's location. Rather than directly fly off, she drops off the side of the nest with wings folded, only flapping away when she is far below.

Both male and female Cerulean Warblers choose the nest site, but the female builds the nest herself, while the male defends their territory. The open-cup nest is made of grasses, moss, and bark strips, bound together by spider silk and decorated with lichens and other light-colored materials. Cerulean Warblers usually nest only once per season, but if that initial attempt fails, the female may start building again using materials from the old nest.

A Cerulean Warbler clutch usually numbers from two to five eggs, which the female incubates for roughly a week and a half. Once the young hatch, both parents help to feed them. The young warblers fledge after another 10 to 12 days.

Over 80 percent of the Cerulean Warbler population breeds in the forests of the Appalachians, inhabiting the canopy of mature forests that include a diverse mix of mid-story and shrub vegetation. These fecund forests provide breeding habitat for a wide variety of life, including other Neotropical migrants such as the Ovenbird, Wood Thrush, and Canada Warbler.

The Cerulean Warbler migrates long distances to winter in Andean mountain forests from Colombia south to Bolivia. Coffee grown under the shade of native trees, often called shade-grown coffee, can also provide important wintering habitat for this species. (Find out about Bird Friendly coffee and how it helps migratory birds.)

Early migrants, Ceruleans leave their breeding grounds before many other species do, often reaching their winter range by late August.

Conservation of the Cerulean Warbler

The Cerulean Warbler is one of North America's most threatened migrant songbirds. Once one of the most abundant breeding warblers in the Ohio and Mississippi River valleys, its numbers have declined by about 70 percent over the past 40 years. Much of this steep decline has been driven by habitat loss on the species' breeding and wintering grounds. Other threats include the Brown-headed Cowbird, which lays its eggs in other birds' nests. This brood parasite invades fragmented forests and lowers the Cerulean Warbler's breeding success. Reversing the Cerulean Warbler's rapid decline is one of ABC's top priorities. In North America, ABC works with the Central Hardwoods and Appalachian Mountain Joint Ventures to provide enhanced habitat for Cerulean Warblers and other birds through science-based forest management practices. In addition to conserving tall trees, strategies include making small clearings that allow more light to reach the forest floor. These “canopy gaps” help to nurture oak and hickory saplings and ultimately result in more dynamic forests. ABC and partners have created a Best Management Practices document to help land managers and landowners create diverse forests that benefit birds as well as people. On the species' South American wintering grounds, ABC and Colombian partner Fundación ProAves created the Cerulean Warbler Conservation Corridor in 2008, and have since been working to enhance habitat quality by planting trees on private lands between the Pauxi Pauxi and Cerulean Warbler Reserves, both managed by ProAves. This work benefits other migratory birds such as the Golden-winged Warbler, and threatened birds found nowhere else, including the Gorgeted Wood-Quail and White-mantled Barbet. The partners have also produced a Cerulean Warbler Conservation Plan in English and Spanish. Read more here about ABC's work to restore caterpillar-rich habitat for Cerulean Warblers! 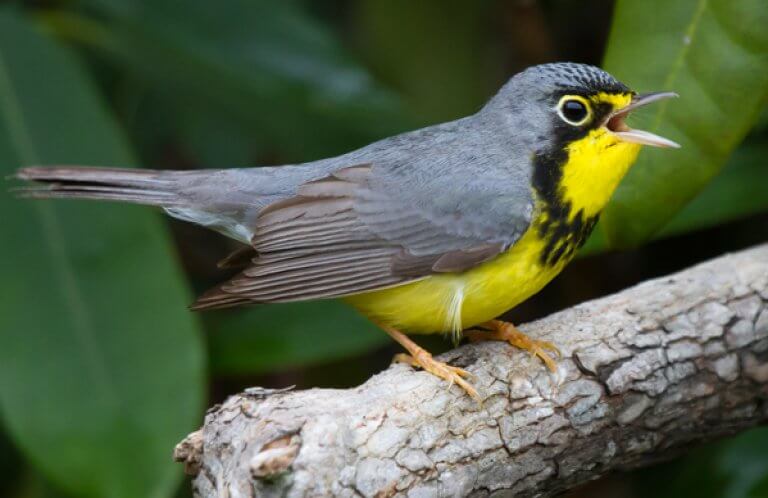