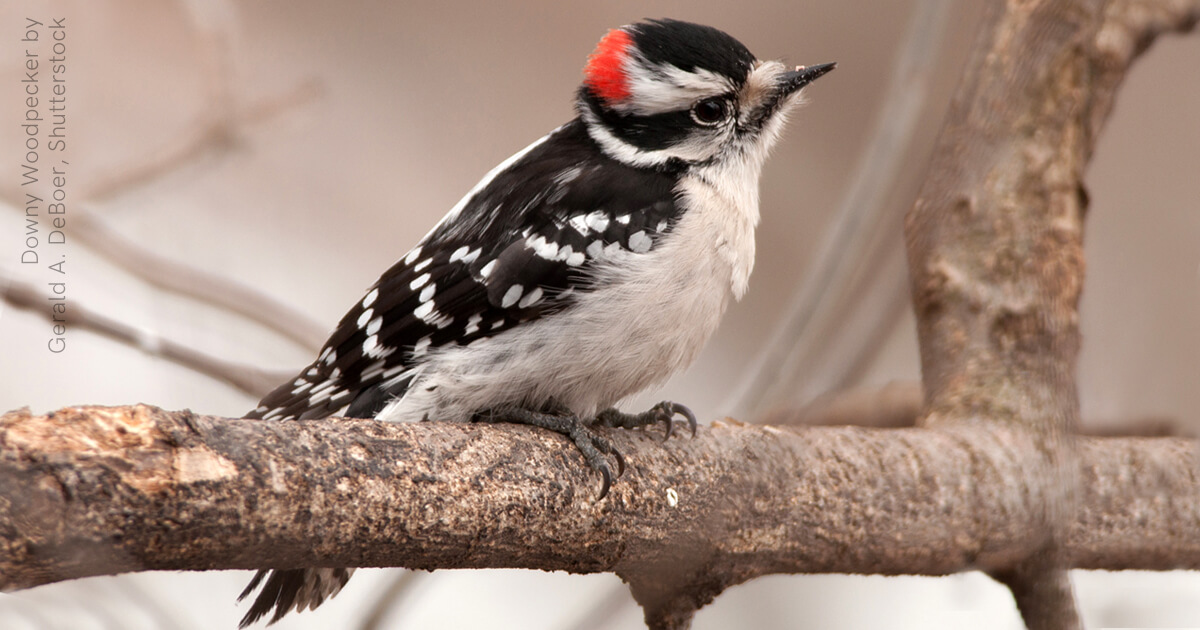 Famed ornithologist John James Audubon remarked that the Downy Woodpecker "is perhaps not surpassed by any of its tribe in hardiness, industry, or vivacity." Other noted naturalists, from Alexander Wilson to Edward Forbush, sang its praises, with Forbush calling this familiar backyard bird a "model of patient industry and perseverance."

The Downy is the smallest woodpecker in North America and could be voted "most likely to visit a backyard feeder," where it holds its own alongside larger birds such as the Northern Cardinal and Blue Jay.

The Benefits of Being Small

Being small has certain advantages. The Downy Woodpecker is able to forage for food where heavier woodpeckers can't, including on the slender upper branches of trees and shrubs and on weed stems. Nimble and active, Downies can even cling upside-down like a nuthatch or chickadee.

Sometimes, a Downy Woodpecker will follow the crow-sized Pileated Woodpecker, taking advantage of the larger bird's excavations and any insects it might overlook. This canny little woodpecker has also been known to follow White-breasted Nuthatches to their seed caches to swipe food, and from fall through early spring, it regularly joins mixed-species flocks of chickadees, titmice, and nuthatches, thereby maximizing foraging opportunities.

The Downy Woodpecker can be found across most of the United States and Canada. Seven subspecies are recognized, based on subtle differences in coloration, marking, and size. The Downy is usually a permanent resident, although northern birds may migrate short distances south, and mountain populations may move to lower elevations during severe winters.

The "downy" in this bird's common name refers to the soft, white feathers of the long, white back stripe, in contrast to the similar, but more hair-like feathers on the back of the Hairy Woodpecker, a larger, similarly marked, yet not closely related species. Recent DNA analyses show that the Downy Woodpecker is most closely related to two southwestern species — the Ladder-backed and Nuttall's Woodpeckers. Scientists speculate that the Downy Woodpecker may have evolved to look like the more formidable Hairy Woodpecker in order to compete for food with larger bird species.

The voices of the smaller Downy and larger Hairy Woodpeckers are often compared, with the larger bird's voice higher in pitch. Compare the calls and drumming sounds of these two species, along with the voice of the Downy's close cousin, the Ladder-backed.

More than 75 percent of a Downy Woodpecker's diet consists of insects, particularly wood-boring beetles, weevils, and other species that humans consider to be pests. In the 1950s and 1960s, Downy Woodpeckers fed heavily on the Elm Bark Beetle, which was responsible for spreading Dutch Elm Disease. More recently, the species has been noted as a predator of the Emerald Ash Borer.

The Downy Woodpecker's black bill is smaller and finer-tipped than that of other North American woodpeckers — more forceps than chisel — allowing this species to pierce shallow insect tunnels and plant galls, and pick tiny insects and eggs from leaves and stems. In backyards, Downies commonly feed on suet, but they also eat some fruits and seeds. Unlike some birds such as the Red-headed Woodpecker, Downy Woodpeckers do not cache food for the winter.

The adult male Downy Woodpecker can be told from the female by the red patch on the back of its head. Otherwise, the black-and-white-checked plumage of adults is the same. Breeding pairs are monogamous, and usually form in late winter and early spring. Like other woodpeckers, Downy Woodpeckers communicate through drumming, which is used to establish and defend a territory, to attract a mate, and to communicate between mates.

Downy Woodpeckers also court through a spectacular display known as the "butterfly flight," typically performed on sunny, warm spring days before nesting begins. During this display, a male and female follow one another in flight with wings held high, flapping slowly and weakly like butterflies.

Downy Woodpecker female; note the downy back feathers that give this species its common name. Photo by Ron Rowan Photography, Shutterstock

A pair chooses a nest site in a snag, usually in wood with an advanced stage of heart-rot. Both male and female excavate the nest cavity and brood the eggs, the male taking a turn each night. Both parents feed the chicks, then continue to care for them for at least three weeks after fledging.

Like the American Robin, the Downy Woodpecker seems to thrive in human-altered habitats. Although it remains common, this bird faces the same threats as less adaptable species, particularly predation by cats, collisions, and pesticide poisoning.

Fortunately, ABC has a number of programs in place to tackle these threats, including our Cats Indoors program, which encourages pet owners to keep cats and birds safe, and our Glass Collisions program, which offers solutions to birds hitting windows.