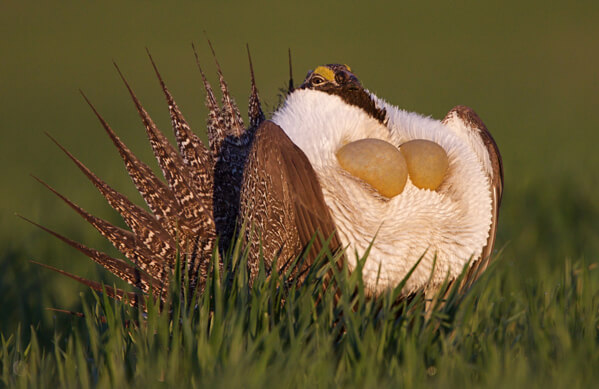 About the Greater Sage-Grouse

Male Greater Sage-Grouse are well-known for their display "dances" on traditional gathering grounds known as leks. Traditional lekking grounds may be used for many years. Although many male sage-grouse gather to display at a lek, only a few are chosen by the majority of visiting females for mating. After mating, the females disperse to areas around the lek to nest.

Greater Sage-Grouse utter a chicken-like cackling call when flushed from cover. Displaying males make a weird assortment of booming, swishing, and popping noises, produced by rattling their stiff tail and wing feathers and inflating and deflating their throat sacs.

Life at the Lek, and Beyond

Although male birds of other species, from the Greater Prairie-Chicken down to the Club-winged Manakin and Chilean Woodstar hummingbird, also display on leks, the Greater Sage-Grouse has come to represent a wider landscape.

Like other lekking species such as the Lesser Prairie-Chicken and Buff-breasted Sandpiper, the Greater Sage-Grouse male plays no role in raising the young. Hens nest under a sagebrush or other large shrub in a well-hidden, grass-lined depression on the ground. A hen lays and incubates a clutch of six to 10 eggs. The downy chicks hatch after two to three weeks and immediately walk out of the nest to follow their mother. In their first week of life, chicks eat many protein-rich insects, but switch to a plant-based diet as they mature.

Greater Sage-Grouse hens and their young sometimes gather with other females in food-rich areas. Post-breeding, other individual grouse may join these groups, sometimes forming winter flocks that number in the hundreds.

The quality of nesting habitat surrounding a lek is one of the most important factors for sage-grouse nesting success, with adequate cover being one of the most critical components.

The Greater Sage-Grouse needs large expanses of healthy sagebrush habitat to thrive. Since it lacks a muscular gizzard like other birds have, it cannot grind and digest hard seeds, and must feed on softer plant material. Sagebrush buds, leaves, and bunchgrasses constitute over 70 percent of its diet year-round, supplemented by insects, fruits, and small amounts of grit. The sage-grouse forages on the ground in open habitats, seeking sheltered feeding spots in harsh weather.

Although the Greater Sage-Grouse is a permanent resident throughout its range, it may make short seasonal movements sparked by food availability and weather. For example, some may move to lower elevations during the winter.

Symbol of the Sagebrush Sea

The charismatic Greater Sage-Grouse is an “umbrella” species, meaning that efforts to conserve it also benefit a wide variety of other wildlife. It is one of the most prominent inhabitants of the sagebrush "sea," which encompasses millions of acres of open lands across 13 U.S. states and small portions of a few Canadian provinces.

These plains are more complex than they first appear, with many varieties of native sagebrush, bunchgrasses, and wildflowers. The sagebrush sea is home to hundreds of bird species besides the grouse, including the Sagebrush Sparrow and Sage Thrasher, plus scores of other animals ranging from the unique Pronghorn antelope to the Great Basin Spadefoot toad. It is also an important migratory corridor for birds, and provides winter habitat for Mule Deer and Elk.

A Species and Ecosystem in Decline

Oil and gas development, overgrazing, sagebrush removal, invasive plants such as Cheatgrass, and wind energy facilities have significantly degraded Greater Sage-Grouse habitat. According to the Sage Grouse Initiative, only 56 percent of the sagebrush ecosystem remains, making it one of the country's most endangered habitats. ABC's work to conserve the Greater Sage-Grouse — including advocating for effective management plans for the species on public lands — continues. Although its population is declining, this bird has yet to receive federal protection. In 2014, a rider was signed into law preventing its protection under the Endangered Species Act. The U.S. Senate recently dropped this rider from its Fiscal Year 2022 Interior Appropriations bill, a hopeful sign that additional conservation measures to stabilize declining Greater Sage-Grouse populations may soon become available.

On November 19, 2021, the Bureau of Land Management announced its intention to review current management plans for the Greater Sage-Grouse. ABC's Steve Holmer, Vice President of Policy, welcomed the news of possible conservation improvements and encouraged that additional steps be taken: “The grouse is on a trend line toward oblivion. It needs the backstop of the Endangered Species Act to ensure that any management changes are really going to stabilize and recover the species.

“The new plans need to address climate change and the significant role oil and gas development has played in grouse declines,” Holmer added.