"Shorebird with a Silver Lining" 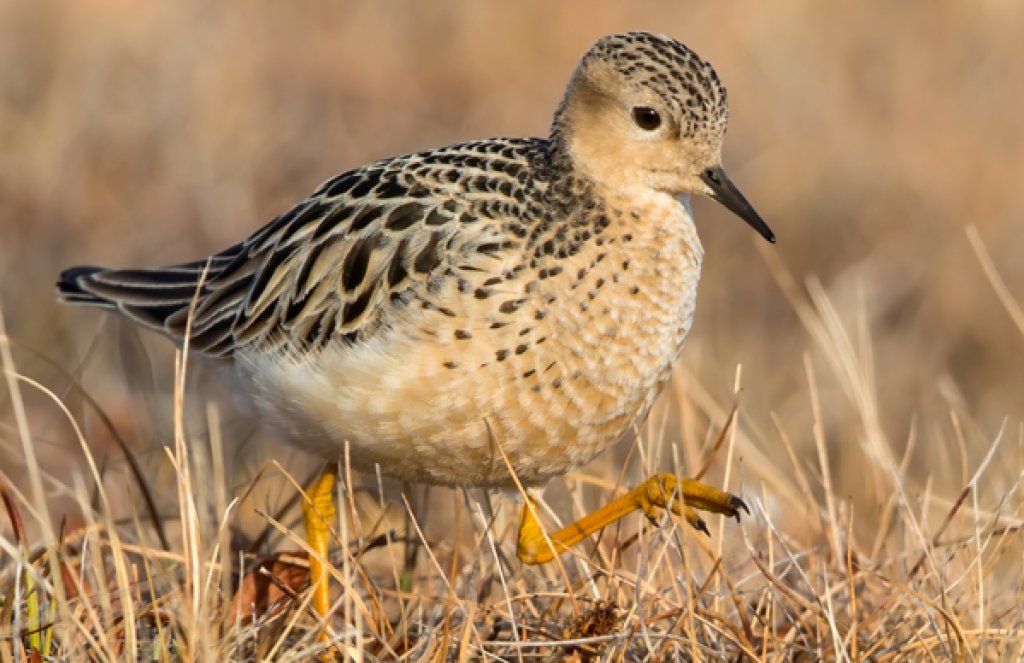 About the Buff-breasted Sandpiper

The dainty Buff-breasted Sandpiper is most often found far from water, away from the usual haunts of most other shorebirds such as the Sanderling and Piping Plover. During migration and winter, this bird visits short-grass prairies, a habitat favored by another "grasspiper," the Mountain Plover.

True to its name, the Buff-breasted Sandpiper is a warm tan all over, with light-edged black feathers on its back, wings, and the top of its head that give it a characteristic scaly appearance. When seen in flight or while displaying, the undersides of this sandpiper's wings flash a striking silvery-white.

The Buff-breasted Sandpiper's rather small, rounded head and upright stance give it a look somewhat reminiscent of a plover rather than a sandpiper. But when it comes to breeding, the Buff-breasted is like no other North American shorebird.

Unique among North American shorebirds, male Buff-breasted Sandpipers gather in groups on display territories called leks, where they flash their eye-catching underwings to compete for females' attention. This type of mating system is well-known in unrelated species such as the Greater Sage-Grouse and Andean Cock-of-the-rock, but is rarely seen in shorebirds (with one exception being the Ruff of Eurasia).

Buff-breasted Sandpipers display in "exploded" leks, where males are spaced more widely apart than in a classic sage-grouse or prairie-chicken lek. Sometimes competitors are out of each other's sight, but they can still hear one another.

The Buff-breasted Sandpiper is usually silent, but when startled, it gives a yelping alarm call. Males give a series of rapid clicking sounds while displaying.

Once arrived on their Arctic breeding grounds, male Buff-breasted Sandpipers gather on display areas to await the inspection of females. When a female saunters by, the males begin to vigorously display, standing on tiptoe and raising one or both wings to flash the silvery-white undersides, while shaking their bodies up and down and giving a series of "tick" notes.

Typical Buff-breasted Sandpiper leks consist of ten or fewer males, but occasionally as many as 20 display in one place. Unlike many polygamous species, in which only a few dominant males mate, many male Buff-breasted Sandpipers appear to breed successfully. Researchers surmise that this more widespread paternity may be due to “nomadism,” a mating tactic in which males roam throughout a breeding range each season, displaying and mating at leks as the opportunity arises.

Occasionally, solitary male Buff-breasted Sandpipers will display away from a lek. Interestingly, these single swains seem to be equally successful at attracting females and siring clutches.

As with other lekking bird species such as sage-grouse, males provide no parental care. Once the female mates, she departs alone in search of a suitable nest site on the ground, where she scrapes out a shallow depression and then lines it with grasses, leaves, mosses, or lichen. She lays four eggs, which she incubates for slightly less than a month. The downy, bright-eyed chicks leave the nest within a day of hatching. Although her young are able to feed themselves immediately, the female stays close until they are fully independent.

In another parallel with plovers such as the Killdeer, the "Buffie" forages by sight, standing still, then making a quick dash to capture prey on the ground. However, during migration (see film linked below), perhaps due to the different prey available, the birds may move constantly, jabbing their bills into short grass. This species may feed in large flocks: For example, in Bolivia, transiting birds are usually seen in groups of five to ten — and sometimes 40 to 60 — individuals.

The Buff-breasted Sandpiper feeds mostly on insect larvae and adults, including those of crane flies, beetles, and midges. During migration, it also feeds on spiders, small crustaceans, and sometimes seeds.

Like the American Golden-Plover, the Buff-breasted Sandpiper is a champion long-distance migrant, leaving high-Arctic dry tundra nesting grounds and migrating thousands of miles to winter on the grasslands of Brazil, Argentina, Uruguay, and Paraguay. During migration, it can be found in grassy areas and along muddy and sandy shorelines. It often prefers areas grazed by cattle (but not overgrazed), possibly echoing feeding behavior that harkens back to when this species shared habitat with now-extinct megafauna that roamed South America 10,000 years ago.

Conservation of the Buff-breasted Sandpiper

Once believed to number in the millions, the Buff-breasted Sandpiper is now uncommon, its population depleted from market hunting in the late 19th- and early 20th centuries. Habitat loss along its migration path through the central U.S. and on its wintering grounds in South America, as well as pesticide use, have further diminished its numbers.

Management actions that would benefit the Buff-breasted Sandpiper include limiting pesticide use in agricultural areas and maintaining suitable habitat on wintering grounds and stopover sites. Limiting oil development would also help to preserve the birds' existing lekking and nesting sites. ABC and partner Asociación Armonía have protected an important stopover site at Bolivia's Barba Azul Reserve, where thousands of Buffies pause after crossing the Amazon Basin during fall migration, to feed and rest before continuing their long journey to the grasslands of Argentina. In just one day in 2021, 1,400 Buff-breasted Sandpipers were counted at Barba Azul. 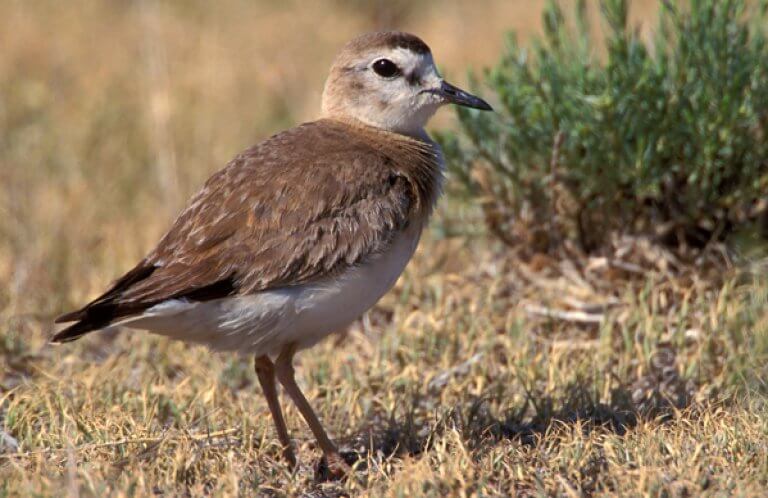