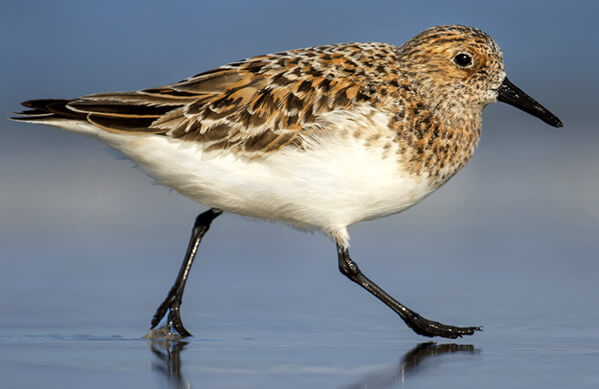 When people think of a "sandpiper," they are almost always picturing a Sanderling at the beach. This plump, pale shorebird (its species name alba means white) can be seen chasing the surf along almost every sandy beach in the world. Noted bird illustrator and author David Allen Sibley compares Sanderlings to windup toys because of the mechanical-looking way these birds scurry to and fro after advancing and retreating waves.

Sanderlings are part of the shorebird family Scolopacidae, a wide-ranging and diverse group ranging from the Semipalmated Sandpiper and Red Knot to the Long-billed Curlew and American Woodcock.

Unlike other members of its family, the Sanderling lacks a hind toe, a modification that helps this bird run across sandy surfaces. The ability to run quickly and efficiently on sand is especially important to this species, which forages along the ocean's edge.

The Sanderling is perhaps the most widespread shorebird in the world, found on every continent except Antarctica. North American Sanderling populations make long-distance journeys between their Arctic breeding grounds and wintering grounds each year. Although some Sanderlings winter on the coasts of the United States, others journey as far south as the tip of Chile and Argentina. Gregarious during migration and in winter, Sanderlings form large feeding and roosting flocks on coastal flats or beaches. Despite its ubiquity, the Sanderling has only two recognized subspecies.

Sanderlings look quite different in their winter and summer plumages. In winter, they are sometimes mistaken for the closely related Dunlin. Both species are pale with gray to grayish backs in their nonbreeding plumage, but Sanderlings are slightly larger, with shorter, straighter bills and all-white underparts. Sanderings also show a grayish half collar, while Dunlins often have smudgy, grayish brown breasts. In breeding plumage, Sanderlings have rufous heads, necks, and breasts but retain the pale underside.

During migration and in winter, Sanderlings patrol the coastline's edge, advancing and retreating with the surf as they probe the sand for small crustaceans, marine worms, and other invertebrates. During breeding season, Sanderlings turn to abundant Arctic insect swarms for food, occasionally supplemented by seeds, buds, and plant shoots.

Saving Sanderlings and Other Shorebirds

Although Sanderlings are still considered fairly common, some surveys in the Americas show troubling declines of up to 80 percent since the early 1970s. Sanderlings' Arctic tundra breeding habitats are threatened by the rising temperatures associated with climate change, while their migratory and wintering habitats are at risk from coastal pollution such as oil spills as well as coastal development and other forms of habitat loss.

Since Sanderlings rely on relatively few food-rich staging areas during their spring migration, the loss of these key concentration areas may impact their survival and breeding success. ABC has successfully advocated for horseshoe crab harvest restrictions in several Mid-Atlantic states and for the creation of a crab sanctuary at the mouth of Delaware Bay.

ABC is also working to conserve important stopover sites for migratory birds, plus breeding and wintering areas, through its BirdScapes approach, and continues to fight to preserve the integrity of important conservation laws such as the Endangered Species Act and Migratory Bird Treaty Act.