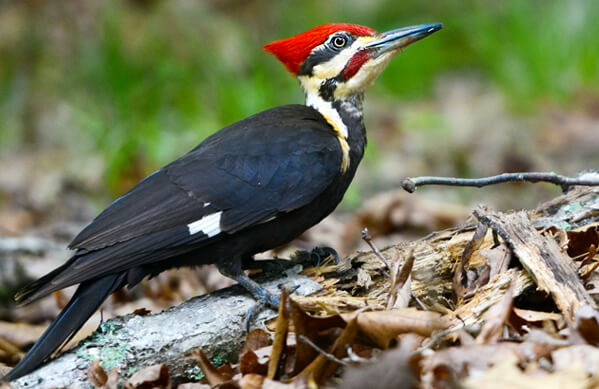 The Pileated Woodpecker is resident across its range. Map by Birds of the World, maintained by the Cornell Lab of Ornithology.

With flashing black-and-white wings and a bright red crest, when a crow-sized Pileated Woodpecker swoops by, even the most experienced birders stop in their tracks. This is the largest of North American woodpeckers. In the United States, only the Ivory-billed Woodpecker, likely extinct, was bigger.

Inspiration for a Name … and a Cartoon?

Why is the bird is named “pileated?” There's a simple reason behind that: It derives from the Latin pileatus, meaning "capped." Just one glance at this bird's bright crest explains the name.

The cartoon connection is a bit more involved.  It turns out that the popular mid-20th century cartoon character Woody Woodpecker was actually inspired by a persistent Acorn Woodpecker that staged a cameo during animator Walter Lantz's honeymoon, calling and drumming at the couple's cabin. Lantz's wife Gracie suggested that Walter make a cartoon character of the bird — and so Woody was created.

The Pileated Woodpecker's main requirement is large trees, including some that are dead and dying. The widely distributed species occurs across at least the southern half of Canada, throughout the eastern United States, and along parts of the Pacific Coast and northern Rockies. Across this wide range, its appearance does not vary much, and only two subspecies are recognized.

Like Hairy, Downy, and other woodpeckers, Pileated Woodpeckers "drum" on hollow trees with their bills to establish territory and attract mates. Mated pairs live on and defend large territories year-round.

Although Pileated Woodpecker pairs share a territory throughout the year, male and female birds roost separately at night. Even if they use the same tree, each bird has its own roosting cavity — probably because their large size would make sharing a cavity an uncomfortable proposition! Roost trees tend to have multiple entrances to allow birds to escape predators.

Pileated Woodpeckers also excavate nesting cavities, usually around 50 feet up in large dead trees. Both sexes hammer out the site, and can often be observed tossing beakfuls of wood chips from the nest hole as they dig. Both incubate the eggs and feed the chicks, which fledge after about a month, then remain dependent on their parents for several months more.

Nest cavities are rarely reused by the Pileateds, but the holes provide crucial nesting and roosting places for many other bird species, including the Wood Duck, Eastern Bluebird, and Eastern Screech-Owl, as well as bats, raccoons, and other mammals. The big woodpeckers sometimes tolerate smaller birds, such as Chimney Swifts, sharing their nesting cavities.

Ever the master excavator, the Pileated Woodpecker makes good use of its strong, chisel-shaped bill to dig into dead trees and fallen logs in search of its main foods, carpenter ants and wood-boring beetle larvae. It creates characteristic rectangular holes as it digs out ant nests (unlike its round nest holes), and smaller birds such as the Carolina Wren often visit these excavations to seek exposed insects the Pileated overlooked.

Pileated Woodpeckers supplement their insect diet with fruits and nuts, and will visit backyard suet feeders, to the delight of human observers.

The Pileated Woodpecker is surprisingly tolerant of human changes to the landscape and has adapted well to suburban and even urban habitats — as long as there are enough mature trees and snags for nesting and feeding. Although it remains widespread and fairly common, this bird faces the same threats as less-adaptable species, particularly predation by cats and collisions with glass.

ABC has a number of programs in place to reduce these threats, including our Cats Indoors program, which encourages pet owners to keep cats and birds safe, and our Glass Collisions program. Explore solutions to keep birds from hitting windows.