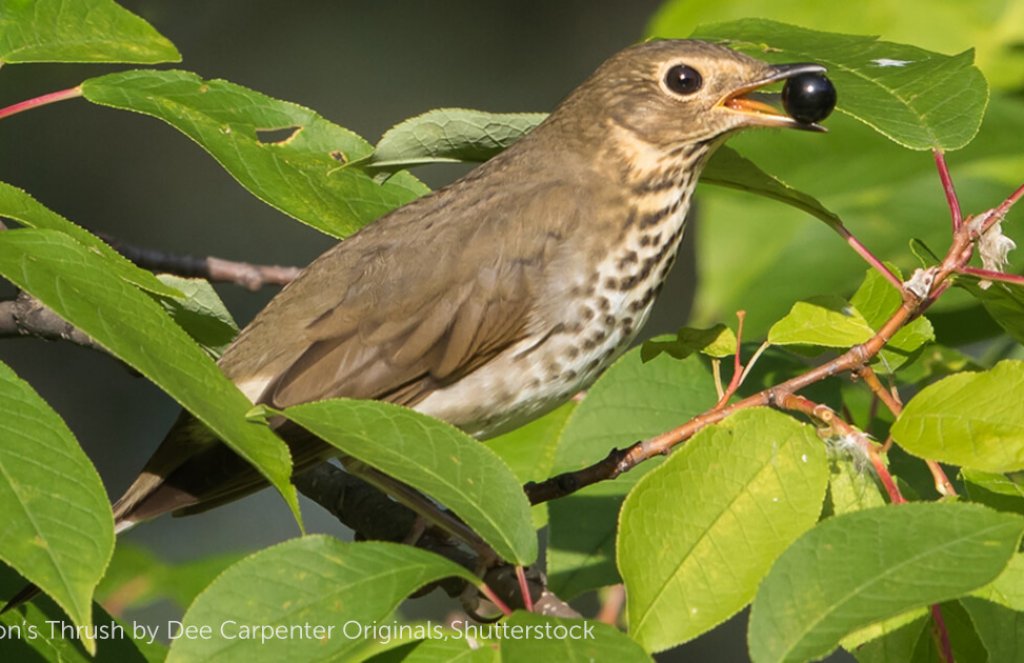 The shy Swainson's Thrush is a bird of deep coniferous woods and dense thickets, more often heard than seen. A quick glimpse reveals a plain-backed, medium-sized thrush, most distinctive for its buffy “spectacles” and the warm, buffy tones of its face and upper chest. Like the Swainson's Warbler and Swainson's Hawk, this bird was named for the 19th century English ornithologist and artist William J. Swainson.

The Swainson's Thrush is a member of the  genus Catharus, a group of sweet-singing North American forest thrushes that also includes the Bicknell's and Hermit Thrushes. But the Swainson's Thrush has a distinctive way of feeding, which led to an unusual nickname.

American ornithologist Arthur Cleveland Bent noted that the Swainson's Thrush was once known as the "mosquito thrush" — not because the bird bites, but because of the way it feeds. While it does forage on the ground like its close relatives, the Swainson's Thrush also hunts in the air, hovering and swooping to nab insects in the manner of an Olive-sided or Great Crested Flycatcher.

More than 70 percent of the global population of Swainson's Thrush breeds in the boreal forests of North America. This widely distributed thrush has six recognized subspecies, divided into two groups: the "Russet-backed" and “Olive-backed” Swainson's Thrushes.

“Russet-backed” birds breed from southeastern Alaska south to California, and migrate to Mexico and Central America for the winter. "Olive-backed" birds are found in the eastern boreal region and the Rocky and Appalachian mountain ranges. The Olive-backed group migrates farther, to South America, where it can be found during the winter at many ABC reserves, including El Paujil and El Dorado in Colombia, Abra Patricia in Peru, and Tapichalaca in Ecuador.

The two groups of the Swainson's Thrush are distinctive enough that continuing research may someday prove that they are actually two separate species.

The only North American thrush species with an ascending song, the Swainson's Thrush, like the Wood Thrush and other relatives, is known for its beautiful vocalizations. Only the male sings, but both sexes give a variety of distinctive call notes, including a soft "whit," and a frog-like flight call heard during nocturnal migration. Listen here:

Swainson's Thrushes show a high degree of site fidelity, returning to the same location to breed year after year. The male arrives first and establishes his territory through song. Once he has attracted a mate, the female builds a cup-shaped nest of twigs, bark, moss, grasses, and mud, lined with hair and other soft materials.

The nest is well-hidden close to a conifer trunk or in other dense cover, usually two to ten feet above the ground. While the female alone incubates the clutch of three to four pale blue eggs, both parents feed the young.

Like other thrushes, including the American Robin and Varied Thrush, the Swainson's Thrush is omnivorous, eating invertebrates and small fruits. During the nesting season, up to one-third of the Swainson's Thrushes' diet comprises fruits and berries – a higher proportion than many of its close relatives.

During the winter, Swainson's Thrushes join resident bird species and other migrants such as the Kentucky Warbler at army ant swarms to capture fleeing insects, centipedes, and other prey.

The biggest threat to the Swainson's Thrush is habitat loss and fragmentation, particularly of boreal forest. As nocturnal migrants, Swainson's Thrushes are also frequent victims of collisions with glass, towers, and wind turbines.

ABC is involved in large-scale initiatives to conserve and better manage migratory bird habitat on breeding and wintering grounds, as well as at stopover sites in between. We do this work through our BirdScapes approach to migratory bird conservation and our participation in Migratory Bird Joint Ventures.