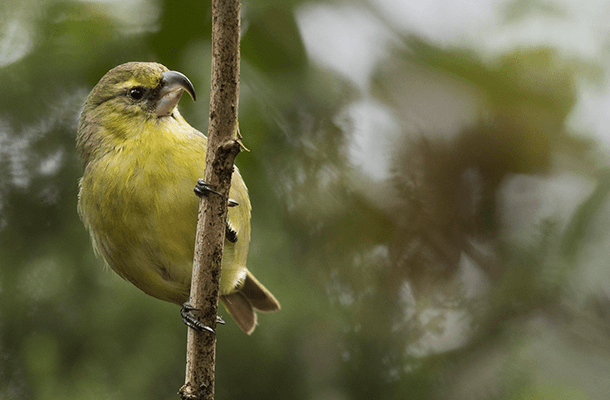 The Kiwikiu is one of several critically endangered bird species at risk of extinction in Hawai'i. Photo by Zach Pezzillo (MFBRP, 2019).

(Washington, D.C., September 29, 2021) Eleven U.S. bird species are on their way to being declared extinct — and "eight of them are in Hawai'i,” noted Mike Parr, President of American Bird Conservancy (ABC), commenting on news announced today by the U.S. Fish and Wildlife Service (USFWS).

The eight Hawaiian bird species that will soon be declared extinct are the Kauai akialoa, Kauai nukupuu, Kauaʻi ʻōʻō, Large Kauai thrush, Maui ākepa, Maui nukupuʻu, Molokai creeper, and Po`ouli. The other U.S. bird species that are presumed extinct are the Ivory-billed Woodpecker and Bachman's Warbler, both formerly found in the U.S. Southeast, and the Bridled White-eye of Guam.

"That said, all of these birds matter, and the loss of each species is a travesty," said Parr. "We at ABC are focused on the place where the next round of  imminent bird extinctions is likely to happen — Hawai'i — and taking action to prevent losing those birds."

Hawai'i is the bird extinction capital of the world. It's home to several bird species that are found nowhere else and are teetering on the edge of oblivion, including the Kiwikiu. "I still have hope that we can prevent the extinction of the Kiwikiu and other Hawaiian birds," said Parr. "If we act now, and decisively, we can ensure a different outcome.”

“The number one-threat to Hawaiian birds is avian malaria, transmitted by non-native mosquitoes,” said Brad Keitt, ABC's Oceans and Islands Director. “This threat is exacerbated by warming temperatures associated with climate change, which allow mosquitoes and the lethal diseases they carry to move into higher elevations — the last refuges of the remaining Hawaiian forest birds.”

ABC is helping to coordinate the design and implementation of a strategy that will disrupt the mosquitoes' breeding cycle. Under the plan, a secure lab is rearing male mosquitoes containing a strain of naturally occurring Wolbachia bacteria that will make them unable to successfully reproduce with wild females in Hawai‘i.

“We're working urgently with our partners in Hawai'i to deploy this solution and prevent the tragedy of future Hawaiian bird extinctions,” said Keitt.

The eight Hawaiian bird species presumed already extinct — including the Kauaʻi ʻōʻō and the Large Kauai thrush — are joined in today's USFWS announcement by 15 other species, including fish and mussels. The total of 23 species listed in the announcement will be removed from the Endangered Species Act due to extinction.

"Sadly, the majority of these species were listed under the Endangered Species Act too late," said Steve Holmer, Vice President of Policy for ABC. "The longer conservation efforts continue, the better the results. The Kirtland's Warbler, delisted in 2019, is an excellent example of a species recovering, slowly but surely, over decades. It is essential that species be listed for protection under the ESA before they are in crisis — and that the ESA remain strong to guard against future extinctions."