In a First, Hawaiian Petrel Chick That Hatched at a Predator-Free Site on Kaua‘i Takes Flight

The fledgling gives conservationists hope that Endangered Hawaiian Petrels will establish a thriving colony within the fence-protected area of Nihokū.

For 10 years, a consortium of partners* led by Pacific Rim Conservation and the U.S. Fish and Wildlife Service and supported by American Bird Conservancy (ABC) have worked at Kilauea Point National Wildlife Refuge on Kaua‘i to establish a predator-free colony of Endangered Hawaiian Petrel (‘U‘au) in a bid to save the species from extinction. That hard work paid off this November, when, for the first time, a Hawaiian Petrel chick that was hatched by translocated parents fledged from the fence-protected area known as Nihokū. Now that this individual has successfully flown off to sea, a Hawaiian Petrel colony has officially been established in Nihokū — a triumph for this long-running project.

The road to this point hasn't been easy. Researchers had to identify a suitable site within Kīlauea Point National Wildlife Refuge, restore the land, build a fence capable of keeping out invasive cats, rats, and pigs, and translocate up to 20 Hawaiian Petrel chicks per year to the site for seven years in a row.

“I remember the start of this project — It feels like a long time ago! — building the fence and bringing the first batch of Hawaiian Petrel chicks to the site,” said George Wallace, Director of International Programs and Partnerships for ABC. “Because of the long period of time to first breeding in the species, it's a gradual process getting a colony started this way, but it is working. All the partners have a lot to be proud of with this one.”

An effort like this is scientifically rigorous, but it also takes a leap of faith. After Hawaiian Petrel chicks leave the nest burrow, they usually spend four to five years foraging on the high seas as they mature to breeding age, then return to breed at the site where they fledged. So, when conservationists first began to translocate birds from unprotected colonies to fledge at Nihokū in 2015, they knew they would have to wait years before they could tell if the fledglings would actually come back as adults. The first sign of hope came in 2020.

In the spring of that year, after five years of translocations, trail camera footage and biologists confirmed an exciting milestone: five Hawaiian Petrel adults returned to the site to prospect the area for nesting. Leg band numbers confirmed that these were indeed birds translocated to Nihokū as chicks years earlier. This was taken as an early sign that the young birds that fledged from Nihokū had successfully imprinted on the site and would likely soon return to breed. However, none of the prospectors settled down that year.

In 2021, biologists confirmed a returned pair of Hawaiian Petrel were breeding within the fence. This pair didn't produce a chick that survived to fledging (first-time breeders often aren't successful in this species), but it gave team members hope that there would be returnees the following year.

Earlier this year, in the summer of 2022, hope and patience were rewarded when three nesting pairs returned to Nihokū. In August, one of those pairs produced the first-ever Hawaiian Petrel chick hatched at the site. That chick successfully fledged in November. Researchers consider this to be the official start of a Hawaiian Petrel colony within the safety of the fence.

“As a group, seabirds are among the most threatened of all birds, and we must celebrate conservation successes like this,” said Brad Keitt, Oceans and Islands Director for ABC. “This is not only a great success for this species, but a great demonstration of what can and needs to be done for many other threatened seabirds on islands around the world.”

ABC and the partners are extremely grateful to the National Fish and Wildlife Foundation for helping to launch the translocation project in 2012, and for continuing to support the project. We also deeply appreciate the long-term support of this project by the David and Lucile Packard Foundation, Lynn and Stuart White, the Martin Foundation, and Marge Duncan. The Kaua‘i Island Utility Cooperative provided critical support for predator control in collaboration with DOFAW in montane nesting areas within the Hono O Na Pali Natural Area Reserve, and the National Tropical Botanical Garden (NTBG) at Upper Limahuli Preserve. NTBG also undertook vegetation restoration at Nihoku. The project takes place within the management and protection of the Hono O Na Pali Natural Area Reserve, and the Kaua‘i DOFAW Natural Area Reserve team provides on-the-ground support. We thank these and many others for their support. 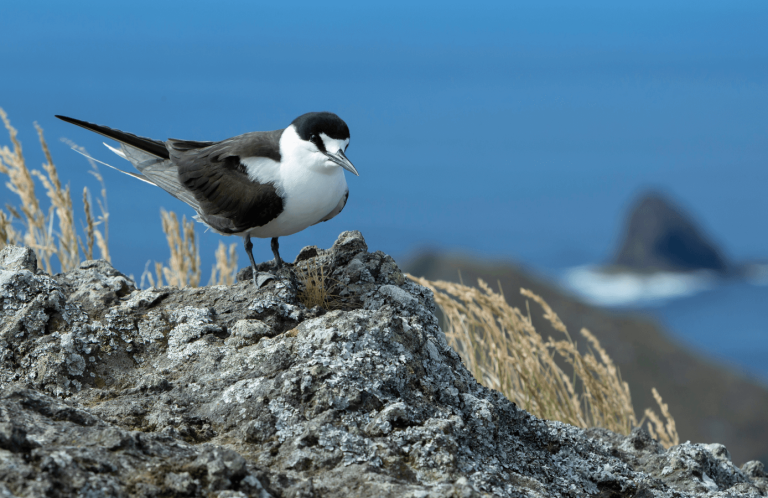 In Exciting First, a Newell's Shearwater has Returned to Nihoku Translocation Site