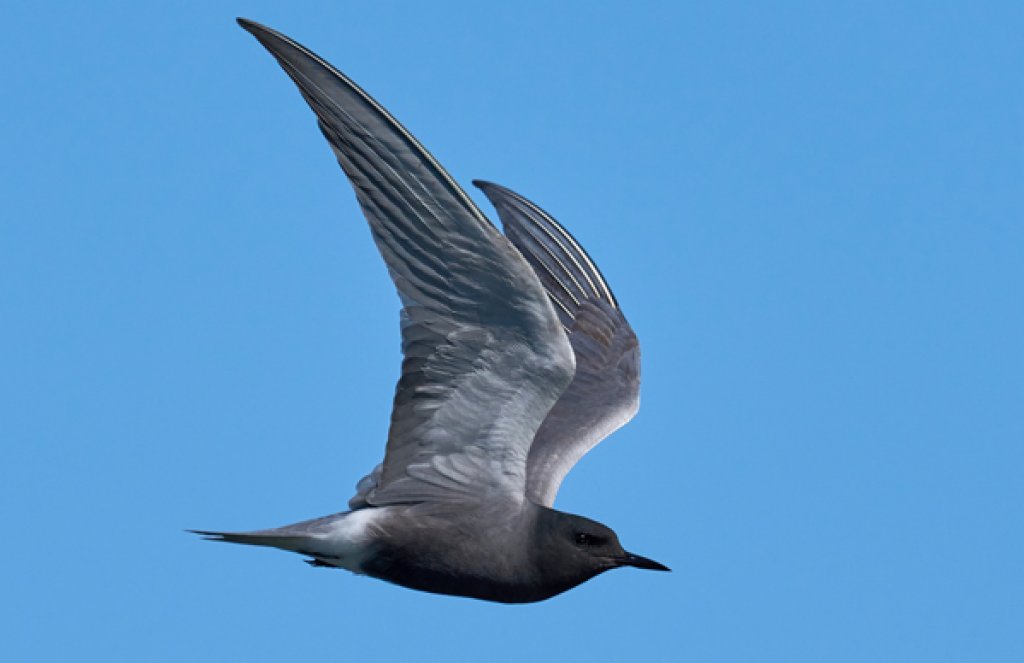 About the Black Tern

The dainty Black Tern is barely larger than a Least Tern, which makes it one of the smallest of its kind in North America. In breeding plumage, this small waterbird is an eye-catching combination of deep black and shades of silvery and charcoal gray. Nonbreeding birds are not as distinct, with white underparts and head, gray wings, and a small amount of black on the back of the head.

American ornithologist Arthur Cleveland Bent described the graceful flight of the Black Tern as “a wayward, desultory flight, light and buoyant as a butterfly.” The Black Tern's genus name Chlidonias is derived from the Greek word khelidon for swallow.

The Black Tern is unique among North American terns in a number of ways.

A Bird of Distinction

Aside from its striking breeding plumage — being the only North American tern with a black head and underparts — the Black Tern differs from other terns in several ways. Unlike its ocean-loving brethren, such as the Royal Tern, it nests in freshwater habitats, only moving to coastlines during migration and winter. Also, it feeds heavily on insects, not fish, during its breeding season, more like an Eastern Kingbird or Barn Swallow. Its feeding style also differs from that of other terns: Rather than plunge-diving, it plucks prey from the water's surface, catches it in the air, or gleans it from marsh vegetation while in flight.

Not as noisy as other birds in its family, such as the Laughing Gull, the Black Tern can best be heard at its semi-colonial breeding colonies. One of its most common calls is a squeaky "kip" or "kik" sound.

Once on their breeding grounds, Black Terns begin courtship with high-flying aerial displays, often performing them in large groups. As the season progresses, males will undertake "fish flight" displays, flying around carrying a small fish or dragonfly to attract a potential mate. A female that accepts this offering will follow the male to a perch where he feeds her the prize; the pair then affirms their bond through additional mutual posturing displays.

Once mated, both parent birds build their nest, a rather flimsy mat of plant material placed directly atop floating vegetation in shallow water, or less often in a scrape on the ground among marsh vegetation. Sometimes, the top of a muskrat lodge winds up serving as the nesting site for a Black Tern pair. These birds usually nest in loose colonies of 11 to 50 nests.

A female Black Tern lays two to four spotted, buff-olive eggs. She and her mate share incubation duties, which last around three weeks. When the eggs hatch, both parents help tend to the young, which fledge in another three weeks or so. Parents usually continue to feed their young for a few weeks post-fledging.

Unfortunately, Black Tern nests are vulnerable to predation, water-level rise, and other disturbances, which means that hatching success is often quite low. Black Tern hatchlings will leave the nest at the first sign of an intruder, often swimming away to hide in surrounding marsh vegetation.

During its breeding season, the Black Tern catches many flying insects, such as dragonflies, damselflies, mayflies, grasshoppers, and beetles. Although the majority of its summer diet consists of invertebrates, if the opportunity arises, a Black Tern might grab small fish, tadpoles, and frogs. During the winter, though, the diet switches to anchovies and other small marine fish, coastal insects, and plankton.

The Black Tern is widely distributed, with a range that encompasses both New and Old Worlds. The "American" Black Tern (surinamensis subspecies) breeds in north-central U.S. states (and in parts of California) and across southern Canada, wintering along coastlines from southern Mexico to northern South America. The Old World subspecies (niger) breeds across Eurasia and migrates south to winter in Africa.

The Black Tern is gregarious throughout the year, nesting and foraging in small groups during the breeding season, then congregating in larger flocks, sometimes numbering in the thousands, during migration and in winter.

Conservation of the Black Tern

Although the Black Tern remains widespread, its numbers have declined noticeably since the 1960s. In North America, Breeding Bird Survey data show steep population declines, particularly in Canada. The Black Tern is listed as a Species of Special Concern in several states. Habitat loss in breeding areas and along migratory routes due to wetland drainage seems to be the main reason for Black Tern declines. Also, agricultural pesticides may be reducing availability of this bird's insect prey, while overfishing impacts its winter food sources.

ABC has long partnered with regional Migratory Bird Joint Ventures (JVs) throughout the U.S. to protect, restore, and enhance habitats for migratory birds such as the Black Tern. ABC's BirdScapes program works toward similar goals on an Americas-wide scale to ensure that birds have the habitat they need at all stages of their life-cycles.

Policies enacted by the U.S. Congress and federal agencies have a huge impact on seabirds. You can help shape these rules for the better by telling lawmakers to prioritize birds and bird-friendly measures. To get started, visit ABC's Action Center.

Plastics pose a deadly threat to seabirds around the world. You can help seabirds by reducing your daily use of plastics. To learn more and get started, visit our Plastics page.

American Bird Conservancy and partners are creating predator-free nest sites for vulnerable seabird species, reducing fishery impacts, and much more. This is a monumental undertaking, requiring the support of many, and you can help by making a gift today. 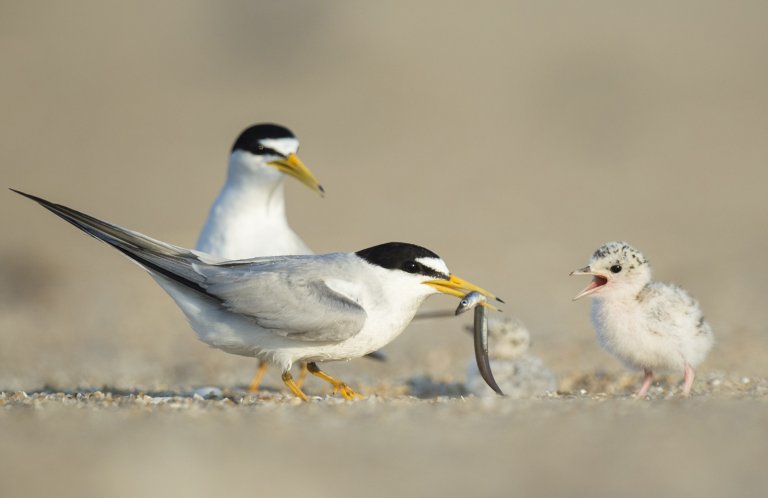 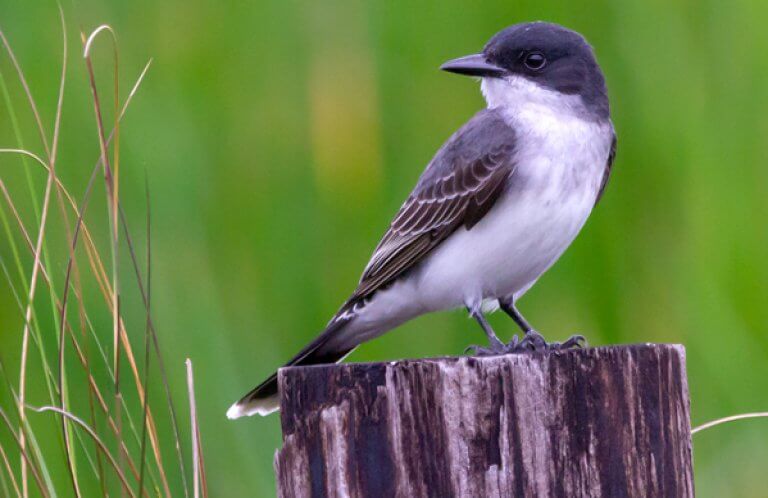 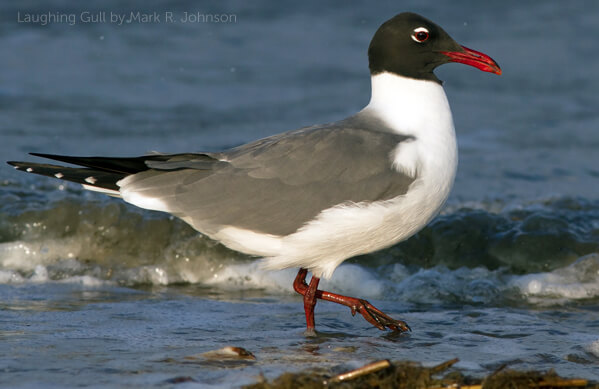