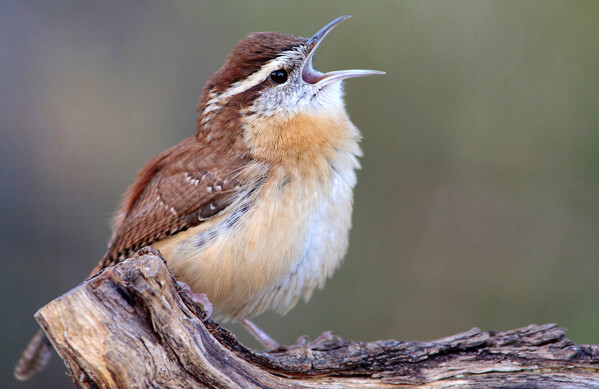 "Like others of its tribe, the Carolina Wren is the embodiment of tireless energy and activity," wrote ornithologist Arthur Cleveland Bent, "seldom still for a moment, as he dodges in and out of the underbrush or creeps over and around a pile of logs."

The Carolina Wren is a familiar backyard bird, like the Northern Cardinal and Downy Woodpecker, although it is more often heard than seen. For those interested in learning how to identify birds by voice, the Carolina Wren provides interesting lessons. Here's one: Although only males sing, the females provide backup.

Unlike other wren species such as the Canyon Wren, in which both sexes have distinctive songs, only the male Carolina Wren sings, belting out a loud "tea-kettle tea-kettle tea-kettle" or "cheery-cheery-cheery." But listen closely and sometimes you'll hear his mate chime in with an enthusiastic, drawn-out trill accompanying the song's end.

Many birds sing early and late in the day during spring and early summer. Not the Carolina Wren: It's on territory year-round, and heard at any daylight hour. One was recorded singing 3,000 times in one day!

The Carolina Wren also has a wide assortment of harsh, scolding calls. Listen to a few here:

Pair (duet starts at about one minute):

The Carolina Wren is the largest wren species found in eastern North America. There are ten recognized subspecies, differing slightly in plumage color and detail. All can be identified by rich reddish brown and buff plumage, accented by a white stripe over the eye.

Once considered a bird of the Southeast, the nonmigratory Carolina Wren's range has been slowly creeping northward since the mid-1900s, facilitated by ever-warming winters that are likely the result of climate change. In cold years, Carolina Wren mortality can be high, and the species' range may contract a bit.

South of the U.S. border, Carolina Wrens occur in northeastern Mexico and the Yucatán Peninsula (including Belize and part of Guatemala). Honduras and Nicaragua also have a few scattered populations.

Carolina Wrens mainly eat spiders and insects such as caterpillars, moths, grasshoppers, crickets, and beetles. But they will also eat bayberry, Sweetgum, Poison Ivy, and sumac berries, plus weed seeds and some fruits. During cold weather, they will visit backyard feeders for suet and nuts.

You will usually find Carolina Wrens foraging on or near the ground near cover, probing tangles, vines, and bark crevices in search of prey with their long, down-curved bills. They also turn over leaf litter in the manner of a White-throated Sparrow or Spotted Towhee.

Carolina Wrens are monogamous, staying together for multiple years. A male and female may form a pair bond at any time of the year and establish and defend a territory with calls, songs, and displays. Both sexes give harsh alarm calls.

A mated pair will set up housekeeping in an astounding variety of places. More traditional nest sites include natural crevices and cavities in rocks and trees, but the adaptable and industrious birds will also construct nests in hanging plant pots, mailboxes, garages, abandoned cars, and even tin cans, shirt or coat pockets, shoes, and hats! They often use artificial nest boxes if provided.

Both male and female build the nest, a dome-shaped structure with a side entrance, weaving together sticks, leaves, and mosses, and lining the inside with feathers and fur. Male  Carolina Wrens may start multiple nests before the pair settles on one. Multiple nests may also serve to confuse potential predators.

Once she lays eggs (usually four of them), the female incubates her clutch alone, sitting tight on her nest even if an intruder draws near. Both male and female feed the blind, helpless young, which mature quickly and are ready to leave the nest about two weeks after hatching. Fledglings may stay together for the rest of the season, while the parent birds get to work raising another brood. Although Carolina Wrens often raise two broods (or three in the South) in a breeding season, their nests are often parasitized by Brown-headed Cowbirds.

Like the American Robin and Blue Jay, the Carolina Wren adapts well to suburban habitats, as long as there is ample cover, including shrubs and tangles. Although its numbers are increasing, this bird faces the same threats as less-adaptable species, particularly predation by cats and collisions with glass.

Fortunately, ABC has a number of initiatives in place to tackle these threats, including our Cats Indoors program, which encourages pet owners to keep cats and birds safe, and our Glass Collisions program, which offers solutions to keep birds from hitting windows.