About the Hooded Warbler

The handsome Hooded Warbler, like Prothonotary Warbler, has a name with roots in ecclesiastical lore. The male Hooded Warbler's black hood and throat make it look as if the bird is wearing a mitre — the cowl-like hat worn by Catholic bishops. This cowled appearance gave rise to one of the Hooded Warbler's more common folk names, "Mitred" Warbler. Its Latin name, citrina, refers to the bird's golden-yellow color, which resembles the gemstone citrine.

The Hooded Warbler's cheerful, ringing song, "tawee-tawee-tawee-tee-o," often gives the bird's presence away before it can be seen, especially since spotting the bird in its thick, dimly lit habitat is sometimes difficult.

Male Hooded Warblers arrive back at the breeding grounds first, and begin to stake out their territories through song. Males have two different modes of singing: one repeating the same phrase, the other mixing three or four different song patterns. The "repeat" mode is most often sung by a male seeking and defending a territory and mate. Studies have shown that female Hooded Warblers favor males that sing more frequently.  Males sing in the "mixed" mode closer to the edges of their territory; this song pattern may be a way of establishing and reaffirming boundaries with rival males nearby.

Females arrive shortly after the males and choose a territory and mate. Sometimes several females will nest within a prime territory. Females often mate with males from outside of their territory, a breeding strategy that introduces greater genetic diversity into their clutches. In one study, almost half of Hooded Warbler females produced young fathered by outside males.

Once mated, a female chooses a nest site, usually low to the ground near the edge of thick forest understory, then builds an open cup nest of bark strips and grasses. She lays three to four eggs, which she incubates alone for almost two weeks. The naked, blind hatchlings develop quickly, and are ready to leave the nest in another week and a half. Both parents feed the chicks, and continue caring for the fledglings for several weeks after they leave the nest.

Like American Redstarts, Hooded Warblers constantly flick their tails open and closed as they work their way through the forest, flashing their white outer tail feathers. This "flashy" habit may startle insects out of hiding, making them easy prey for the bird. Hooded Warblers tend to feed low in the understory, gleaning insects off the ground or darting after them flycatcher-style.

The Hooded Warbler is a bird of eastern deciduous forests, with the core of its population found in the southeastern United States. Its breeding range stretches from southern Canada south to Florida and west to eastern Texas.

The Hooded Warbler is a medium- to long-distance migrant, moving south to winter in Mexico and Central America; some also winter on Caribbean islands and parts of northern South America.

The Hooded Warbler is territorial on its wintering grounds in the Caribbean, Mexico, and Central America, fiercely defending a defined feeding area against others of its species. Males and females use different habitats during the winter; males use mature forests and females frequent shrubby and flooded areas.

Since they are nocturnal migrants, Hooded Warblers are often victims of deadly collisions with glass, towers, and wind turbines. This warbler is also vulnerable to forest fragmentation, which exposes both birds and their low-built nests to predators such as free-roaming cats, and to Brown-headed Cowbirds, brood parasites that lay their eggs in warbler nests.

ABC's work helps to conserve Hooded Warbler and other migratory birds across their full annual life-cycle through our BirdScapes approach to conservation. The Conservation Coast and Caribbean Forest BirdScapes are two areas that provide winter habitat for the Hooded Warbler and other neotropical migrants, ranging from Wood Thrush and Bicknell's Thrush to Eastern Whip-poor-will. We also collaborate with the Cornell Lab of Ornithology and Colombian partner SELVA, using research from the Neotropical Flyways Project to identify critical stopover habitats for migratory birds such as Hooded Warbler. Tools such as the Cornell Lab's eBird are playing an important role in this work. Citizen scientists' observations are adding to an ever-growing body of knowledge about bird migration patterns, which supports better-targeted conservation efforts.

Our efforts to reduce glass collisions are helping save Hooded Warblers and other species such as White-throated Sparrow and Swainson's Thrush from fatal encounters with windows. (See our Bird-Smart Glass page, which offers a variety of solutions for homeowners and builders alike.)

In addition, ABC's Cats Indoors program offers a number of ways for concerned bird-lovers to engage on the problem of free-roaming cats, which kill billions of birds each year in the United States alone. 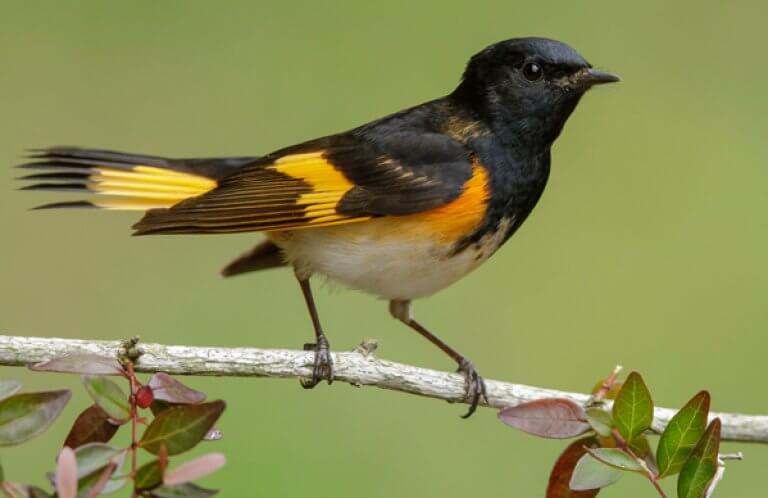